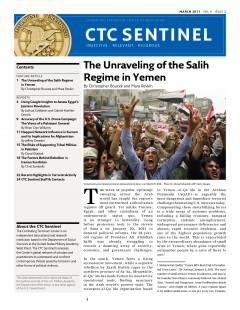 The Unraveling of the Salih Regime in Yemen

The wave of popular uprisings sweeping across the Arab world has caught the region’s most entrenched authoritarian regimes off guard. Yet unlike Tunisia, Egypt, and other custodians of an undemocratic status quo, Yemen is no stranger to instability. Long before protesters took to the streets of Sana`a on January 20, 2011 to demand political reforms, the 32-year-old regime of President Ali Abdullah Salih was already struggling to contain a daunting array of security, economic, and governance challenges. Yet Yemen’s current political crisis has been heightened by the convergence of numerous security threats, the cumulative effect of which may soon overwhelm the government in Sana`a. With government security forces already overextended by the challenge of containing mass demonstrations, AQAP is taking advantage of the opportunity to consolidate its position in Yemen by proclaiming solidarity with anti-government protesters and intensifying its attacks on security targets.

The Unraveling of the Salih Regime in Yemen

Accuracy of the U.S. Drone Campaign: The Views of a Pakistani General

Haqqani Network Influence in Kurram and its Implications for Afghanistan

The Risks of Supporting Tribal Militias in Pakistan

The Factors Behind Rebellion in Iranian Kurdistan