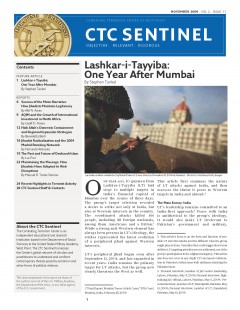 Since the september 11 attacks on the United States, the internet has become a hostile domain for jihadists.[1] The internet is increasingly monitored by government and non-government entities that seek to disrupt jihadist communications and reduce the presence of jihadist material on the web. Jihadists have been forced to adapt to this mounting pressure by copying the practices of internet “pirates” who distribute illegal materials such as copyrighted music, movies, software and illicit pornography. These practices have allowed jihadists to continue their communications and propaganda activities. Today, jihadists have been inspired by websites of the most diverse character. Their goals are to enhance the visual appearance and accessibility of their content, and improve website security and reliability.

This article explains how jihadists have adapted to attempts to shut down their websites and disrupt their communications. Jihadists are increasingly using file-hosting websites and web forum software to sustain the accessibility of their content on the internet. These new technologies have allowed them to avoid some of the main weaknesses that have affected their operations in recent years.

In the early years of jihadist online activity, many groups created their own websites with the intention to broadcast announcements, videos of their operations, speeches by their leaders, and other material of interest.[2] Jihadist groups, however, had a difficult time maintaining a steady online presence.[3] Various governments and other actors concentrated their efforts on shutting down a small group of websites connected to major terrorist organizations, such as al-Qa`ida. Al-Qa`ida’s official alneda.com website, for example, suffered incessant harassment after the September 11 attacks, and the site was taken offline. Major terrorist groups were forced to continuously establish new domain names and use different web hosts to keep their sites operational.[4]

This practice, however, also became unsustainable. Changing web hosting companies required payment, which was a problem for jihadist groups since it created a paper trail. To bypass this vulnerability, jihadist users paid with stolen credit cards. Again, however, this process was not practical; their website account only remained active until the fraud was discovered by the credit card’s legitimate owner, and the hosting company would then shut down the account. The jihadists were then forced to start the process all over again.

To avoid these limitations, jihadists tried hosting their websites using free web hosting companies such as Geocities.com and Yahoo.com. These companies offered free web hosting to any user who supplied a valid e-mail address. Yet since the services were free, the companies only offered a limited amount of monthly data transfer. As a result, when a jihadist website became popular, it exceeded its data transfer quota and the site was subsequently suspended. Jihadist websites, in effect, died from success.

Another strategy was to hack into legitimate websites (generally of U.S.-based institutions and companies, due to their performance reliability) and store jihadist-related content on their servers. This “parasite” strategy was useful when the goal was the rapid dissemination of files among a radicalized audience, who would be notified of the files’ location via e-mail lists. The content could then be downloaded and multiplied on hundreds of new websites before the hacking action was discovered and removed. Yet this process was progressively abandoned due to the fact that website security has increased dramatically over time, and businesses have become more aware of the threat. Continuing the hacking process in this environment requires more advanced technology capabilities, which most jihadists simply do not possess.

As a result, the strategy of creating official websites was largely discarded and an alternative strategy adopted.[5] To overcome these obstacles, jihadists evolved toward a more horizontal and diffuse presence on the internet based on the labor of a network of volunteers. The foundation of this strategy is internet web forums.[6] Forums present a series of useful functions for jihadist groups. Moreover, they have become essential tools in the diffusion of propaganda. The forums are especially attractive due to the ease in which they can be designed and managed.[7]

The main utility of web forums is that they promote the spontaneous participation of their members, which has resulted in sites that “live and breathe” and therefore are constantly growing and changing. Administering the web forums can be carried out simultaneously by a limitless number of users, who can participate in the administration anonymously. In fact, many site administrators have no connection to actual members of jihadist groups and achieved their positions by being “promoted” through the web forum’s roster. They achieve promotion by their commitment to write new articles, post new material, and assist with other web forum tasks. This system helps to maintain the reliability of web administration; even if senior members of the website disappear or are killed, users located all over the world can continue to keep the site operational.

Use of web forums, however, did not solve the jihadists’ data transfer restrictions. Jihadist propaganda has increasingly taken the form of sophisticated video and audio statements, which require massive storage and transfer capabilities. Jihadist web forums are not capable of covering these needs. Yet, what has made these forums so successful is that they have avoided storing much of this material on their servers. Instead, to avoid data restrictions, jihadists have resorted to the same free website services used by people to illegally download movies, music, software and illegal pornography: document-sharing and file-hosting websites.[8]

The process works as follows. When a new official jihadist group notice, video or audio file is released, multiple users upload the file to various file-hosting websites, creating hundreds of URL links to where that file can be downloaded. A large list of links, or virtual library of hyperlinks, is then posted on multiple jihadist web forums. Once a user reads the post, they then duplicate the forum posting on another forum. This practice is welcomed and encouraged by the rest of the readers, which allows the original user to gain prestige and continue ascending in the forum’s “roster.”

Many of the hyperlinks expire quickly or are disabled by the file-hosting company, yet the sheer number of hyperlinks and uploads makes it difficult to completely eliminate access to the file. Moreover, jihadist website users pursue a number of practices—copied from music, movie and software pirates—to increase the duration of time that the file stays accessible. First of all, they rename the file so that it has a neutral denomination or without any apparent meaning so that hosting companies cannot identify the content of the file unless they actually view it. Second, they encrypt the file and archive with a password that is communicated on jihadist forums. By locking the file with a password, the file-hosting company’s administrators tasked with searching for such content cannot access the file themselves to review whether it is illicit. Moreover, the process can be relatively anonymous. For example, users can store the file on a portable USB device and upload it directly to the file-hosting website at an internet cafe.

The advantages of using this distribution platform exceed those found in peer-to-peer (P2P) file-sharing programs such as Kazaa, EMule and related software. By using file upload websites, rather than P2P file-sharing programs, jihadists are able to remain more anonymous. Using P2P services, for example, involves transferring a file from one computer hard drive to another. This method can be more easily traced, as seen when authorities investigate individuals involved in sharing child pornography or copyrighted music. Moreover, access to a P2P program—such as Kazaa—is difficult for jihadists who use internet cafes, as those cafes often use security software that disallows users the ability to download and install P2P software. Jihadists, for example, regularly frequent internet cafes because many do not own their own computer, or they use cafes due to the increased anonymity they offer.[9] These weaknesses explain why P2P software has not been the main distribution platform for jihadist media.

The internet continues to evolve, and it is allowing global communications to be more effective. Jihadists are constantly innovating and incorporating new technologies useful to the spread of propaganda. Moreover, the jihadist internet infrastructure is increasingly fed by an “army” of heterogeneous radicalized youth who employ various technologies to further their common cause. These youth incorporate their personal experiences—such as their search for friends through social networks to the illegal downloading of software and music—into the jihadist infrastructure, helping to maintain the reliability and sustainability of this radical content.

Dr. Manuel R. Torres Soriano is Professor of Political Science at Pablo de Olavide University of Sevilla in Spain. He received his Ph.D. from the University of Granada, with his thesis on “The Propagandistic Dimension of Global Jihadist Terrorism,” a work that achieved the Defense Prize, awarded by Spain’s Ministry of Defense. He was a visiting fellow at Stanford University, Johns Hopkins University, King’s College of London and the London School of Economics and Political Science (LSE). He is the author of the book, The Echo of Terror: Ideology and Propaganda in Jihadist Terrorism (Madrid: Plaza and Valdes, 2009).

[3]  There is not an exact number of websites of jihadist inspiration. The estimates tend to oscillate between 5,000 websites, suggested by the Israeli professor Gabriel Weimann, and 50,000 according to the data of an automatic inquiry completed by a group of researchers at the Artificial Intelligence Laboratory of the University of Arizona under the project “Dark Web Terrorism Research.”

[5]  This is not true of all terrorist groups. Some terrorist groups not directly linked to the global jihad (for example, organizations part of the Iraqi insurgence) have been able to keep their official websites active. This is primarily because it is only the most prominent terrorist groups that consistently have their websites targeted for disruption.

[6]  Hanna Rogan, “Jihadism Online – A Study of How al-Qaida and Radical Islamist Groups Use the Internet for Terrorist Purposes,” Norwegian Defence Research Establishment, 2006.

[7]  For example, the majority of jihadist forums employ the popular commercial software VBulletin. This software is easier to manage than any other website design program, offering an ample variety of options to personalize the forum.