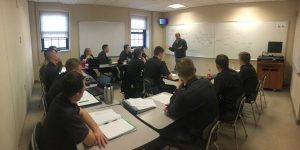 On 28 February, the Combating Terrorism Center was pleased to host LTG(R) Charles Cleveland for a series of guest lectures to cadets. LTG(R) Cleveland, a former USASOC commander and current CTC senior fellow, spoke to cadets about unconventional warfare in both sections of the Center’s Combating Terrorism course. Additionally, he spent over an hour speaking with cadets in the CTC’s popular Irregular Warfare Group.