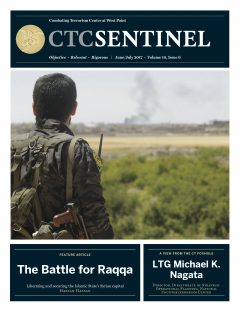 Two recent developments suggest the Islamic State’s caliphate pretensions are being consigned to history. The first is the group’s destruction of the Great Mosque of al-Nuri in Mosul, where three years ago Abu Bakr al Baghdadi declared his caliphate to the world. The second is the fact that the Syrian Democratic Forces (SDF), a U.S.-backed Kurdish and Arab militia, has now entered the city limits of Raqqa, the group’s de facto capital in Syria. In our cover article, Hassan Hassan outlines the challenges ahead in liberating and holding Raqqa. While removing the Islamic State from the city could take anywhere from weeks to months, he argues the harder task will be for the force, whose backbone is made up of Kurdish fighters, to prevent the Islamic State from exploiting ethnic tensions to destabilize the city after it is liberated. But he argues there is a window of opportunity for the SDF to bring sustainable security to Raqqa and surrounding areas because of the willingness of local tribes to work with liberating forces and warming relations between the SDF and Syrian Sunni rebel groups, who increasingly view the U.S.-backed force as a check on the Assad regime’s ability to regain control of northeastern Syria.

While the Islamic State is shrinking, Lieutenant General Michael K. Nagata, director of the Directorate of Strategic Operational Planning at the U.S. National Counterterrorism Center, in a wide-ranging interview on evolving terror threats, draws attention to the group’s organizational resilience in the face of withering pressure from the coalition fighting it.

The Islamic State’s attack on Tehran on June 7 was a case in point. At a time of rising sectarian tension across the Middle East, Chris Zambelis argues the Islamic State carried out the attack in part to bolster its recruitment and fundraising efforts—and one-up al Qa`ida—as it pivots from territory control to global terrorism. Michael Horton examines the enduring threat posed by the Islamic State’s local affiliate in the Sinai, arguing counterproductive tactics by the Egyptian government risk provoking a broader insurgency. In a study based on comprehensive data on those arrested in Spain for terrorism crimes maintained by the Elcano Royal Institute in Madrid that has wide implications for the understanding of radicalization processes across Western countries, Fernando Reinares, Carola García-Calvo, and Álvaro Vicente find that jihadi radicalization in Spain has been driven by two key factors of “differential association,” namely contact with radicalizing agents and pre-existing social ties with other radicalized individuals.

The Battle for Raqqa and the Challenges after Liberation

Crossing the Canal: Why Egypt Faces a Creeping Insurgency

Terror in Tehran: The Islamic State Goes to War with the Islamic Republic