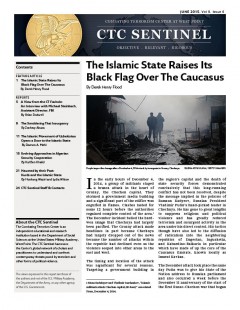 The tug-of-war among the jihadi fighters in the North Caucasus about whether to remain autonomous, affiliate themselves with al-Qa`ida’s core leadership, or follow the Islamic State appears to have been decided in the Islamic State’s favor. An audio recording posted on June 21 to YouTube stated that mujahideen from Dagestan, Chechnya, Ingushetia, and Kabardino-Balkaria had sided with the Islamic State’s leader Abu Bakr al-Baghdadi, a pledge that was quickly accepted by the Islamic State. Moscow will likely be forced to reappraise its current security calculus for the Russian Federation’s most violent region.

The Islamic State Raises Its Black Flag Over The Caucasus

A View from the CT Foxhole: An Interview with Michael Steinbach, Assistant Director, FBI

Haunted by their Past: Kurds and the Islamic State