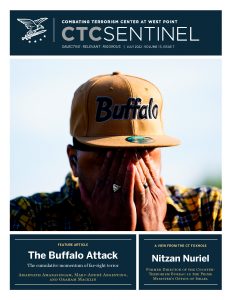 From the Editor
In this month’s feature article, Amarnath Amarasingam, Marc-André Argentino, and Graham Macklin examine the May 2022 extreme far-right live-streamed terrorist attack at a grocery store in Buffalo, New York, in which 10 Black Americans were murdered “in one of the deadliest racist massacres in recent American history.” Their article examines the perpetrator, his pathway to violence, how he plotted the attack, and his writings. They argue that “the Buffalo massacre was not an isolated phenomenon. Indeed, one can only fully comprehend it when considered within a continuum of self-referential extreme-right terrorism inspired by the March 2019 terrorist attack on two mosques in Christchurch, New Zealand,” that had “a catalytic effect upon extreme-right actors, sparking a chain reaction of mass shootings.”

Our interview is with Nitzan Nuriel, the former director of the Counter-Terrorism Bureau in the Prime Minister’s Office of Israel. It is the second in a series of articles and interviews examining the terrorist threat landscape in Israel and the lessons other countries can learn from Israel’s counterterrorism efforts. The series is a joint effort between the Combating Terrorism Center at West Point (CTC) and the International Institute for Counter-Terrorism (ICT) at Reichman University in Israel.

Rodger Shanahan “uses data from Australian terrorism trials in the Islamic State era to examine the degree to which mental health issues exist among terrorism offenders and whether there is any causal link.” His findings “support the view that Islamist terrorists’ mental health is largely the same as the general population and finds that there is little evidence to support any causal link between mental health and terrorism.” Matteo Pugliese profiles convicted Islamic State terror planner Muaz al-Fizani, whose jihadi career “spanned two decades and three continents” taking the hardline Tunisian extremist from Italy to Bosnia and Afghanistan and from Tunisia to Libya, from where he helped plan a wave of terror in Tunisia in 2015 that resulted in the deaths of many Western tourists.