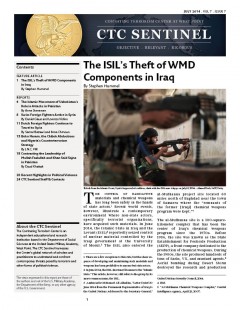 The control of radioactive materials and chemical weapons has long been safely in the hands of state actors. Recent world events, however, illustrate a contemporary environment where non-state actors, specifically terrorist organizations, have acquired such materials. In June 2014, the Islamic State in Iraq and the Levant (ISIL) reportedly seized control of nuclear material controlled by the Iraqi government at the University of Mosul. The ISIL also entered the al-Muthanna project site located 60 miles north of Baghdad near the town of Samarra where the “remnants of the former [Iraqi] chemical weapons program were kept.” During the 1980s, the site produced hundreds of tons of Sarin, VX, and mustard agents. Aerial bombing during Desert Storm destroyed the research and production facilities at al-Muthanna and ended its ability to produce chemical weapons. The exact contents of the two bunkers that the ISIL entered, however, are not generally known. The lack of control of radioactive materials and former chemical weapons agents in Iraq is a concern, but the requisites to make the stolen materials into a weapon of mass destruction are currently lacking. This article provides important technical context surrounding the capture of radioactive materials and the possible theft of decaying chemical weapons by the ISIL in Iraq. It finds that while such incidents are a threat in the immediate and long term in the Middle East, the potential for mass casualties is currently low due to scientific and technical challenges faced by the ISIL.

The ISIL’s Theft of WMD Components in Iraq

The Islamic Movement of Uzbekistan’s Role in Attacks in Pakistan