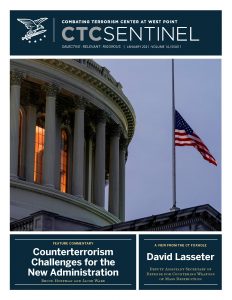 The violent storming of the U.S. Capitol on January 6, 2021, has heightened concerns about the threat posed by far-right extremism in the United States. In examining the wide range of terrorism and counterterrorism challenges facing the incoming Biden administration in this month’s feature commentary, Bruce Hoffman and Jacob Ware write that “the January 6 events at the U.S. Capitol offered a stark, frightening picture of the powerful forces fueling a conspiratorial mindset eschewing both the country’s foundational democratic values and the rule of law” and “serves as a salutary and timely reminder of the danger of potential violence to come.” Given the continued threat posed by “a stubbornly resilient Islamic State and an implacably determined al-Qa`ida,” they write that “it may be that as the United States and its allies enter the third decade of war against international salafi-jihadi terrorism, we need to recalibrate our immediate expectations away from ‘winning’ and ‘losing,’ toward ‘accepting’ and ‘managing’ this conflict. Such an admission would not be popular, but it would be a fairer reflection of the current state of the fight against terrorism, and a more honest prediction of what to expect over the next four, or more, years.”

Our interview is with David Lasseter, the Deputy Assistant Secretary of Defense for Countering Weapons of Mass Destruction. He notes that “advances in synthetic biology and other related biotechnologies hold the potential for both promise and peril in their application. And so we’ve got to be cognizant of how such technological shifts can alter the threat landscape [and] impose new defense and security challenges. We’ve heard it said that biological weapons are ‘a poor man’s nuke,’ given the potentially enormous impact of their usage. I think COVID-19 has further accelerated this mindset. The U.S. has had a watchful eye on bio threats and has elevated bio threats as a core national security priority over the past several years.”

In an assessment that has far-reaching implications for the U.S. military mission in Afghanistan, Jonathan Schroden finds that if the United States were to withdraw the remainder of its troops from the country, the Taliban would have “a slight military advantage” over Afghanistan’s security forces, “which would then likely grow in a compounding fashion.” Nodirbek Soliev examines the Tajik connection in an Islamic State plot against U.S. and NATO air bases in Germany thwarted in April 2020.

Terrorism and Counterterrorism Challenges for the Biden Administration

A View from the CT Foxhole: David Lasseter, Deputy Assistant Secretary of Defense for Countering Weapons of Mass Destruction

Afghanistan’s Security Forces Versus the Taliban: A Net Assessment