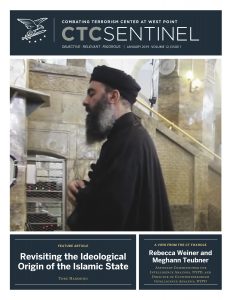 In our cover article, Tore Hamming revisits the ideological origins of the Islamic State. He argues that “despite its history as a local al-Qa`ida affliate in Iraq, the Islamic State developed from an ideological and cultural trend born in late-1980s Afghanistan that was always in tension with the core idea and identity of al-Qa`ida,” setting the stage for the current bitter divide between the two groups and creating a significant obstacle to any reunification of the global jihadi movement.

Our interview this month is with Rebecca Weiner, the Assistant Commissioner for Intelligence Analysis at NYPD, and Meghann Teubner, NYPD’s Director of Counterterrorism Intelligence Analysis. Despite the demise of the Islamic State’s territorial caliphate, they have not seen much of a fall-off in jihadi terrorist plotting against New York City. While they assess Islamist terrorism remains the primary threat to the city, their focus on far-right terrorism is more intense than ever before.

With concern about violent right-wing extremism rising on both sides of the Atlantic, Graham Macklin examines the evolving far-right terror threat picture in the United Kingdom, focusing in particular on the terrorist group National Action.

In 2007, coalition forces captured Qais al-Khazali, the head of Asa`ib Ahl al-Haqq (AAH), an Iran-backed Shi`a militia group accused of killing U.S. soldiers in Iraq. Al-Khazali was released in 2010, continues to lead AAH, and has become a significant political player in Iraq. Bryce Loidolt outlines how the recently declassified interrogation reports from al-Khazali’s time in custody reveal significant rifts between Shi`a militant power centers in Iraq and argues that such “rifts are likely to persist and will complicate Iran’s ability to project its influence in the future.” In 2018, al-Qa`ida’s leader Ayman al-Zawahiri released more messages than in the previous year and ratcheted up his threat rhetoric against the United States. Jami Forbes warns al-Qa`ida’s increased media outreach may signal both a revitalization and that it is readying to pivot back to attacking its far enemies.

The Hardline Stream of Global Jihad: Revisiting the Ideological Origin of the Islamic State