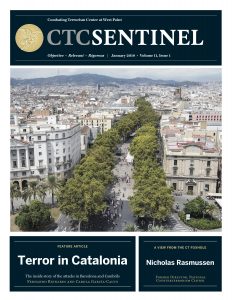 During the course of nine hours in August 2017, a terrorist cell carried out two vehicle-ramming attacks in Catalonia, with the first striking pedestrians on the famous Las Ramblas promenade in the heart of Barcelona. In our cover article, Fernando Reinares and Carola García-Calvo draw on judicial documents and interviews with investigators to provide the inside story of the worst terrorist attack in Spain since the 2004 Madrid bombings. Their account reveals the 10-man cell of ‘homegrown’ radicals, led by an extremist Moroccan cleric in the town of Ripoll, had initially planned to carry out vehicle bomb attacks in Barcelona and possibly Paris, but changed and accelerated their plans after they accidentally blew up their bomb factory where they were manufacturing TATP. While it is still not clear whether the cell had any contact with the Islamic State, the authors reveal that the network behind the November 2015 Paris attacks was also plotting to launch a similar attack in Barcelona that year.

This month’s interview feature is with Nicholas Rasmussen, who retired as the head of the U.S. National Counterterrorism Center (NCTC) at the end of 2017. Michael Knights and Matthew Levitt draw on interviews with Bahraini security officials to outline how Shi`a militant cells in the country have evolved from easily detectible groups of amateurs to small cells of attackers with overseas training and combat experience and the ability to mount effective IED attacks. Matthew DuPée looks at the threat to the Taliban from other insurgent groups. Anouar Boukhars examines the potential jihadi windfall from the militarization of Tunisia’s border region with Libya.

“Spaniards, You Are Going to Suffer:” The Inside Story of the August 2017 Attacks in Barcelona and Cambrils

The Evolution of Shi`a Insurgency in Bahrain