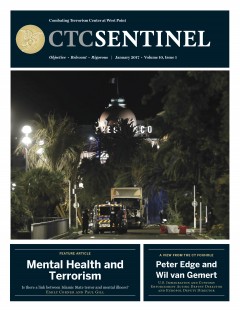 The deadly attack at Fort Lauderdale airport earlier this month by an individual claiming to have been influenced by voices he heard and to have acted on behalf of the Islamic State has renewed attention on the nexus between terrorism and mental health. In our cover article, Emily Corner and Paul Gill explore what they argue are complex and often misunderstood links. Their preliminary findings show that the proportion of attackers in the West possibly influenced by the Islamic State with a history of psychological instability is about the same as the rate of such instability in the general population, though the rate is higher than in the general population if Islamic State-directed attacks are excluded. This is in line with their previous findings that group-based terrorists are much less likely to have mental disorders than lone-actor terrorists. They also question the degree to which lone-actor terrorists with mental disorders are symptomatic at the time of attacks. Lone-actor terrorists with mental disorders, they have found, are just as likely to engage in rational planning prior to attacks as those without. Their research has also found a significantly higher rate of schizophrenia among lone-actor terrorists than in the general population. There is a long-running debate about whether this condition could make individuals of all ideological persuasions less inhibited in moving from radical thought to radical action.

In a joint interview, Peter Edge, Acting Deputy Director of U.S. Immigration and Customs Enforcement, and Wil van Gemert, Deputy Director of Europol, focus on the challenges of identifying, tracking, and interdicting foreign terrorist fighters and steps being taken to deepen transatlantic cooperation. Michael Horton argues that AQAP’s deepening ties to anti-Houthi forces in Yemen’s civil war is making the terrorist group even more resilient and difficult to combat. Don Rassler examines the contest between the United States and jihadis on drones and drone countermeasures. Jason Warner looks at the three newly self-declared affiliates of the Islamic State in sub-Saharan Africa.

Drone, Counter Drone: Observations on the Contest Between the United States and Jihadis

Is There a Nexus Between Terrorist Involvement and Mental Health in the Age of the Islamic State?

Fighting the Long War: The Evolution of al-Qa`ida in the Arabian Peninsula