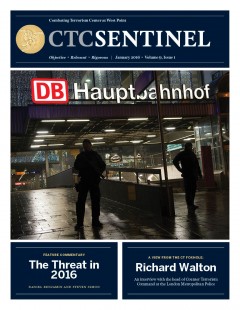 From the Editor
Our first issue of the year forecasts how the global terrorist threat may evolve in 2016. Two months on from the Paris attacks and with deadly attacks already perpetrated in Istanbul, Jakarta, and Ouagadougou, there are storm clouds overhead. In our cover story Daniel Benjamin and Steven Simon predict that continued progress in the campaign against the Islamic State in Iraq and Syria could see the group double down in 2016 with increased attacks in Europe, Russia, and Turkey as well as possibly Lebanon and Jordan. But they assess that an attack under the command and control of the group is less likely in the United States. In our interview, Commander Richard Walton, who for almost half a decade has headed Counter Terrorism Command (SO15) at the London Metropolitan Police, explains how British security agencies have mobilized to confront an unprecedented terrorist threat. After the Paris attacks, France’s Prime Minister Manuel Valls raised the specter of the Islamic State using weapons of mass destruction (WMD) against the West, a threat Captain Stephen Hummel assesses in his article. With no end in sight to the conflict in Yemen, Gregory Johnsen predicts both al-Qa`ida in the Arabian Peninsula and the Islamic State will continue to expand, and may, as they compete for recruits and try to outbid each other, plot attacks against the West. In the Sahara-Sahel region, following attacks on hotels frequented by Westerners in Bamako and Ouagadougou, Andrew Lebovich envisages that competition between groups aligned with the rival global terror franchises will lead to greater insecurity. Magnus Ranstorp analyzes how Hezbollah’s future calculations and behavior may be affected by the Iranian nuclear deal and other regional dynamics. Kirsten Schulze provides a briefing on the Jakarta attack and the Islamic State threat to Indonesia.

The Global Terror Threat in 2016: A Forecast

The Islamic State and WMD: Assessing the Future Threat

The Hotel Attacks and Militant Realignment in the Sahara-Sahel Region

The Jakarta Attack and the Islamic State Threat to Indonesia