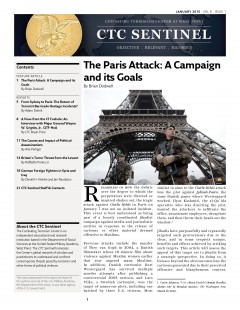 The Paris Attack: A Campaign and its Goals
By Brian Dodwell

Regardless of how the debate over the degree to which the perpetrators were directed or inspired shakes out, the tragic attack against Charlie Hebdo in Paris on January 7 was not an isolated incident. This event is best understood as being part of a loosely coordinated jihadist campaign against media and journalistic entities in response to the release of cartoons or other material deemed offensive to Muslims. Jihadis have purposefully and repeatedly targeted such provocateurs due to the clear, and in some respects unique, benefits and effects achieved by striking such targets. This article will assess the appeal of this target set to jihadis from a strategic perspective. In doing so, it focuses beyond the obvious emotions the cartoons generated due to their perceived offensive and blasphemous content. Rather, it examines the strategic goals of jihadis to inspire sympathizers to commit violence, to exacerbate social divisions, and to provoke a heavy-handed and counterproductive response.

NOTE: If you are experiencing any trouble downloading the pdf in Internet Explorer, please try updating to a newer version or using a different browser.

The Paris Attack: A Campaign and its Goals

From Sydney to Paris: The Return of Terrorist Barricade Hostage Incidents?

The Causes and Impact of Political Assassinations

Britain’s Terror Threat from the Levant