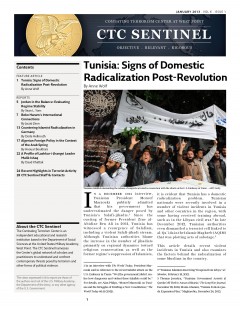 In a December 2012 interview, Tunisian President Moncef Marzouki publicly admitted that his government has underestimated the danger posed by Tunisia’s Salafi-jihadis. Since the ousting of former President Zine al-Abidine Ben Ali in 2011, Tunisia has witnessed a resurgence of Salafism, including a violent Salafi-jihadi stream. Tunisian nationals were recently involved in a number of violent incidents in Tunisia and other countries in the region, with some having received training abroad, such as in the Libyan civil war. In late December 2012, Tunisian authorities even dismantled a terrorist cell linked to al-Qa`ida in the Islamic Maghreb (AQIM) that was plotting acts of sabotage. This article details recent violent incidents in Tunisia and also examines the factors behind the radicalization of some Muslims in the country.

Algerian Foreign Policy in the Context of the Arab Spring