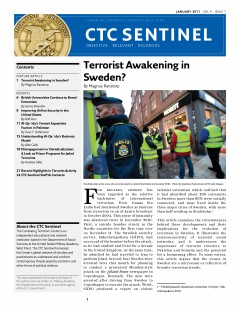 For decades, Sweden has been regarded as the relative backwater of international terrorism. Even Usama bin Ladin had mentioned Sweden as immune from terrorism in an al-Jazira broadcast in October 2004. This sense of immunity was shattered twice in December 2010. First, a suicide bomber struck in the Nordic countries for the first time ever on December 11. Second, four Swedes were arrested later that month for planning to conduct a protracted Mumbai-style attack on the Jyllands-Posten newspaper in Copenhagen, Denmark. Third, SÄPO produced a report on violent Islamist extremism which outlined that it had identified about 200 extremists in Sweden. This article examines the circumstances behind these developments and their implications for the evolution of terrorism in Sweden.

Disengagement or Deradicalization: A Look at Prison Programs for Jailed Terrorists