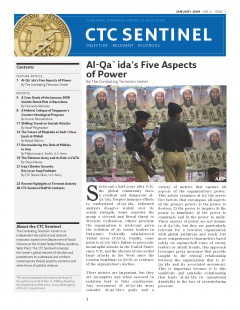 As Iraq enters what appears to be a period of relative stability and recovery, more attention is being given to the country’s international boundaries and Ports of Entry (POEs). Iraqi and coalition forces have been able to progressively improve Iraq’s internal security environment and successfully counter al-Qa`ida in Iraq (AQI), insurgents and militia organizations in the cities and provinces. The Iraqi government and coalition forces are now shifting efforts to stopping the cross-border flow of foreign fighters, war materiel and contraband from Iraq’s neighbors. The success of the Iraqi security forces in halting the violence and maintaining a secure and stable environment is critical to the U.S. goal of drawing down forces starting in 2009. In addition to providing background information on Iraq’s border and security institutions, this article argues that improving Iraq’s border security should be a primary goal as the United States approaches an Iraqi endstate.

Iraq shares approximately 2,260 miles of land border with Iran, Jordan, Kuwait, Saudi Arabia, Syria and Turkey, and a 36-mile coastline. Comparatively, Iraq is approximately twice the size of the state of Idaho. Both Iran and Syria continue to be the greatest source of smuggling, including AQI operatives, foreign fighters, and munitions. Although Iraq still has difficulty halting these illegal cross-border flows, it has been able to progressively hinder these malign actors along the Syrian border in tandem with its coalition partners. The cross-border flows from Iran and Syria, however, have yet to be effectively halted. In most cases, the Improvised Explosive Devices (IEDs) and suicide bombers can be traced back to these two countries.

The Directorate of Border Enforcement (DBE) is a paramilitary organization consisting of approximately 40,000 border police and officers organized into five geographic regions of 13 brigades and 41 battalions, which are outlined in Figure 1 (see PDF). The DBE’s mission is to secure Iraq’s land and water borders. The battalions are stationed along the international boundaries and operate from a network of border forts and annexes from which guards conduct border patrols and smuggling interdiction operations. The Coastal Border Guards (CBG) is integral to the DBE, and it has the mission to safeguard Iraq’s water boundary between Basra and the Persian Gulf along the Shatt al-Arab with Iran. The DBE’s current three-year border strategy infrastructure plan calls for a border fort or annex along every five to seven kilometers of Iraq’s borders [1]. Once complete by the end of 2010, Iraq will be ringed by 712 border forts and annexes.

The DBE has the additional responsibility for the Customs Police present at air, land and sea POEs and also located throughout the country at customs stations. Lastly, the immigration officers working at all POEs are also assigned to the DBE and responsible for screening travelers entering Iraq. The DBE is a relatively new organization established in 2003 and has assumed duties performed by the pre-war Iraqi Army. The DBE is plagued in many cases by a lack of qualified border guards and suffers from all manners of equipment and infrastructure shortages.

Iraq has 17 land, six air, and five sea POEs. The land POEs are managed by port directors that report to the Port of Entry Directorate (POED) in Baghdad. The POED was originally organized within the DBE, but on September 13, 2008 the directorate was removed from DBE authority by ministerial order and now reports directly to the prime minister’s office. This has exacerbated an already weak unity of effort in controlling the country’s borders. The separation of the POED and DBE has also led to a rivalry, and low-level tensions are mounting between these two organizations at the borders [2]. The presence of corrupt officials, poorly paid guards and historical smuggling routes complicates Iraq’s border security efforts. Furthermore, the DBE-POED fracturing of border security forces will predictably lead to poor synchronization in border control and anti-smuggling operations. This is a primary coalition force concern as it turns its attention to halting the flow of AQI operatives, foreign fighters, and munitions from Iran and Syria into an increasingly stable Iraqi state.

Iraq’s border security is vital to the ability of the state to exercise its sovereignty and to prevent violence from destabilizing and terrorizing its population. Iraq’s boundaries have numerous border regions that are porous, both on the Iraq-Iran and the Iraq-Syria borders. In the south along the Shatt al-Arab, illegal land and waterway crossing points provide access to smugglers bringing lethal aid into Basra Province. The lack of armored patrol craft has hindered the CBG in countering rocket smuggling from Iran into the Basra region. The intermittent rocket attacks on British forces in the Basra region are a result of the lack of Iraqi capacity to interdict waterborne smuggling routes.

Farther north, multiple illegal crossing points in Maysan and Wasit provinces facilitate the flow of lethal aid into Baghdad. Illegal crossing points in Diyala represent the shortest route into Baghdad. Smuggling and the flow of explosives and munitions is a further challenge due to the willing actions of tribal members seeking profit. The porous western border with Syria provides multiple routes for foreign terrorists and facilitators to bring fighters into Iraq. Ninawa Province provides a permissive environment for the entrance, transfer, and movement of terrorists. Farther south and west in Anbar Province, the long border with Syria, Jordan, and Saudi Arabia provides easy access for extremists and allows them to support Sunni insurgents in Iraq. Long earthen berms several feet wide and high normally mark the border in these vast open desert regions; however, the inability of the DBE to repair the numerous breaks and washouts makes this obstacle ineffective.

On the Iraq-Syria border, foreign terrorists and facilitators continue to infiltrate the porous border and move to safe houses and transit points in the Jazira Desert and west of Mosul before reaching operational cells. Any disruption to the flow of terrorists has been followed by AQI-paid disenfranchised Iraqis conducting suicide attacks or emplacing IEDs. The Iranian Revolutionary Guard Corps-Quds Force (IRGC-QF), the Iranian Ministry of Intelligence Service (MOIS), the Badr Organization and Jaysh al-Mahdi (JAM) militias smuggle both foreign trained fighters and lethal aid through the borders. Corrupt officials and border guards make counter-smuggling efforts even more difficult. Reporting from U.S. forces identifies POEs along the Iranian border “reopening” after normal hours of operations and allowing busloads of travelers and trucks into the country without screening and inspections [3]. Presumably, bribes are being paid to the POE staff.

Intricate networks of safe houses and transit points in Iraq mask the movement of indigenous and foreign fighters and lethal aid amidst the Iraqi populace. Interdiction of smuggling routes and sponsors leads to the Iranians shifting to secondary routes to limit disruption and more ISF and coalition force interdiction. These facilitation networks, some of which are affiliated with cross-border tribal activities, use multiple means at varying times to move people and contraband across Iraq’s boundaries. While Iraq and Turkey have agreed to counter terrorists along the borders, the mountainous terrain along their boundaries makes border security operations much more difficult. In addition, the presence and operations of Kurdistan Workers’ Party guerrillas in the Iraqi borderlands neighboring Turkey all but annuls Iraq’s authority in the region.

To facilitate Iraq’s border service, coalition forces have established Border Training Teams (BTTs) and POE Training Teams (POETTs), small units usually of less than 20 soldiers and civilian experts (contractors or U.S. government), which are normally co-located with DBE units and/or POEs. These training teams are found from the region headquarters down to battalion level, and at land Ports of Entry. These BTTs and POETTs play an increasingly important role in U.S. efforts to professionalize, advise, and train the DBE and POED organizations. Interestingly enough, the greatest challenge faced by Iraqi border forces is the continual lack of fuel [4]. Without proper resourcing, the DBE cannot conduct border patrols or power border fort generators. Without electricity, the border forts and POEs cannot provide lighting, air conditioning, refrigeration for food stocks or effective communications. This situation is aggravated by corrupt officers selling the fuel on the black market, the tendency of those in charge to “hoard” and underreport inventory levels, and the immature logistics systems. The DBE is currently pursuing an aggressive infrastructure program constructing regional fuel distribution and storage centers, maintenance facilities, and brigade and battalion headquarters buildings throughout Iraq.

U.S. Goals and the Iraqi Endstate

The porous boundaries and continued smuggling of foreign fighters, AQI operatives and war materiel into Iraq continue to hamper U.S. efforts in establishing a sustainable, violence free security environment in the country. This impedes U.S. efforts of planning to gradually decrease the troop presence and withdraw from Iraq. The at times unfettered flow of terrorists and contraband across Iraq’s borders continues to prevent the growth of a more robust Department of State presence in leading nation-building efforts. Coalition forces recognize the transnational threat to the precarious security gains in provinces across Iraq. By buttressing the Iraqi border forces with an expanding training team presence, coalition forces in tandem with its Iraqi partners have directly challenged Iraq’s terror-sponsoring neighbors. This considerable and effective training team method used in the development of the Iraqi Army is being transitioned to Ministry of Interior forces, which currently lag behind the Iraqi Army but are responsible for maintaining internal and border security. In addition, the minister of interior has swapped out entire POE staffs to combat the corruption and the cozy relationships that developed between POE directors and smugglers. This act alone has signaled the Ministry of Interior’s institutional resolve to break the cycle of corruption and harden Iraq’s porous boundaries.

The uncertainty of Iraq’s future has continued to allow Iran to grow into the regional powerbroker, which is anathema to U.S. strategic interests. By assisting the Iraqi government in enhancing their border security operations, the United States and Iraq can focus on establishing a secure and stable environment that will attract investment, develop the economy, and allow the Iraqi leadership to accommodate sectarian and national differences with the promise of a successful state. A strong and secure Iraq will bolster U.S. interests by becoming the natural counter-weight to, or even displacing, an increasingly dangerous Iran. By focusing on Iraq’s nascent border security institutions—the DBE and POED—coalition forces are ensuring that Iraq becomes capable in halting transborder smuggling that continues to support AQI, the insurgency and Iranian-backed militias. As long as Iraq’s international frontiers remain porous, external malign actors, such as AQI and Iran, will continue to threaten Iraq’s security, economy and future.

LTC Steven Oluic, Ph.D., served as an Assistant and Associate Professor in the Department of Geography at the United States Military Academy and currently serves with Multinational Forces in Iraq. His research interests focus on nationalism and state collapse in the former Yugoslavia. He has published Bosnia & Herzegovina: Identity, Nationalist Landscapes and the Future of the State (Oluic, 2007) and has numerous articles on nationalism, security and Islamic fundamentalism in the former Yugoslavia and among Balkan Diasporas in the United States. His current research investigates Iraq’s efforts to halt trans-boundary smuggling of insurgents, terrorists and contraband.

[1] In April 2008, the DBE released the “Iraq’s Directorate of Border Enforcement Three Year Border Strategy.” The plan is an outline presenting the DBE’s construction and equipment requirements.

[2] Shortly after these organizations were separated, the al-Waleed and Shalamsha POE directors have moved to remove the DBE organizations from the POE grounds.

[3] Observations made by the Department of Homeland Security and border officials at Zurbatiya POE and mentioned during meetings with the author in September 2008.