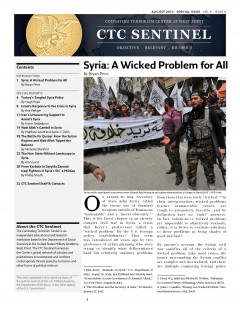 Throughout the current war in Syria, Iran has remained a steadfast supporter of the Bashar al-Assad regime. The surprising endurance of the Iran-Syria alliance is made more striking by the fact that it is based on neither shared national interests nor religious values, but is rather a tactical-cum-strategic partnership between two authoritarian regimes. Mutual contempt for Saddam Hussein’s Iraq brought Syria and Iran together in 1980, and mutual fear and loathing of the United States and Israel has helped sustain their alliance.[1]

Iran initially supported the popular uprisings in the Middle East—calling them “Islamic awakenings”—when it appeared that only Western-allied Arab autocracies in Tunisia, Egypt, and Yemen were vulnerable to collapse. In Syria, however, Tehran has offered unwavering support to the embattled al-Assad regime and denounced the Syrian opposition as “terrorists” supported by a motley alliance of Gulf Arab states, Israel, and the United States. Senior Iranian figures, such as former Foreign Minister Ali Akbar Velayati, have referred to Syria as “a golden ring of resistance against Israel,” and Supreme Leader Ayatollah Ali Khamenei-confidante Mehdi Taeb said that Syria is Iran’s “35th province…if we lose Syria we won’t be able to hold Tehran.”[2] Without Iranian military aide and financial largesse, al-Assad’s regime may have fallen long ago.

Strategic Interests at Stake in Syria
Syria has been Tehran’s only consistent ally since the 1979 Islamic revolution. Whereas the rest of the Arab world supported, and in some cases bankrolled, Saddam Hussein during the Iran-Iraq war, Hafiz al-Assad’s Syria sided with Tehran. While Iranian and Syrian tactical interests have occasionally diverged during the last three decades, on macro-strategic issues the two regimes have more often worked in unison.

Beyond its political support, Syria is also critical to Iran in that it provides it a geographic thoroughfare to Lebanese Shi`a militia Hizb Allah, which is one of the crown jewels of the Iranian revolution. Both Syria and Hizb Allah are crucial elements of Iran’s resistance alliance, and much of Hizb Allah’s armaments are thought to emanate from Iran via the Damascus airport.[3]

Iranian motivations in keeping the al-Assad regime in power are also driven by deep concerns about the composition of a post-Assad government. Given Syria’s overwhelming Sunni Arab demographic majority, Iran fears the prospect of Syria being rendered a Sunni sectarian regime aligned with Saudi Arabia or the United States and hostile to Shi`a Iran.[4] While visiting Damascus in August 2012, former Iranian Supreme National Security Adviser Saeed Jalili stated that “Iran will absolutely not allow the axis of resistance, of which it considers Syria to be a main pillar, to be broken in any way.”[5] In other words, if the ends are opposing the United States and Israel, almost any means are justified.

Iran’s Level of Involvement in Syria
While Iran’s major role in Syria is undeniable, it is impossible to discern Tehran’s precise financial and military assistance to the al-Assad regime. According to official estimates, Iran’s annual trade with Syria is only around $700 million per year, which is less than half of its trade with Afghanistan and a small fraction of its $30 billion trade with China.[6] This figure, however, does not take into account the subsidized oil Iran has provided Syria since 1982, when Damascus agreed to close Iraq’s oil pipeline through Syrian territory.[7]

Since the tumult began in Syria, Iranian financial largesse has been ever more critical. In January 2013, Syrian state media announced a $1 billion “credit facility agreement” with Iran.[8] Five months later, Syrian officials announced that Iran would provide Damascus an additional $3.6 billion line of credit “to finance the purchase of petrol and associated products.”[9]

Similar to other Iranian strategic outposts in countries undergoing tumult—such as Iraq and Afghanistan—it is the elite wing of the Islamic Revolutionary Guard Corps (IRGC), known as the Qods Force, that oversees Tehran’s activities in Syria—not the Iranian Foreign Ministry. Defected former Syrian Prime Minister Riyad Hijab went so far as to say that “Syria is occupied by the Iranian regime. The person who runs the country is not Bashar al-Assad but [Qods Force commander] Qasem Soleimani.”[11] The U.S. Treasury department sanctioned Soleimani and Operations and Training Commander Mohsen Chizari for their role in “the violent repression against the Syrian people.”[12]

Iran has also allegedly dispatched IRGC ground forces to Syria with experience suppressing popular unrest in provincial areas within Iran, such as ethnic and tribal insurgencies.[13] Dozens of these forces were allegedly kidnapped by anti-Assad rebels in August 2012, only to be released later as part of a prisoner exchange.[14] While Tehran alleges that they were religious pilgrims, evidence suggests otherwise.[15]

In addition to financial and military support, during the last three decades Iran has made a concerted effort to forge cultural and religious bonds between the Iranian and Syrian populations by offering its citizens heavily subsidized flight and hotel packages to Syria.[18] Millions of Iranian religious tourists have visited the Sayyida Zaynab Shi`a shrine in Damascus.

Challenges and Opportunities
Iran’s greatest challenge is sustaining its large financial aid to Syria while simultaneously enduring draconian international sanctions—in place due to its nuclear ambitions—that have cut its oil exports by half.[19] One Arab official estimated that Tehran is spending as much as $600 to $700 million per month to keep al-Assad solvent.[20] Absent a nuclear deal that reduces economic sanctions and allows Iran to increase its production and export more oil, Tehran’s financial support for Syria could be viewed with increasing scrutiny at home by a population chafing under external economic pressure and internal mismanagement.[21]

Apart from its financial burden, Iran’s support for Syria has caused it great reputational harm in the predominantly Sunni Arab world. Whereas several years ago Shi`a, Persian Iran was able to transcend ethnic and sectarian divides by appealing to popular Arab outrage against the U.S.-led war in Iraq or the 2006 Israeli invasion of Lebanon, today Iran is increasingly perceived by Sunni Arabs as a nefarious, sectarian actor.[22] Lebanese Hizb Allah has suffered a similar fate due to its support of al-Assad.

If the al-Assad regime loses Damascus, Tehran will face a difficult strategic decision: whether to preserve a sphere of influence by supporting a predominantly Alawite militia representing only a small fraction of Syrian society, or to befriend the Sunni rebels poised to wield authority in Damascus. Contrary to conventional wisdom, what is most important for Iran is not the sectarian composition of Syria’s future leaders, but a like-minded ideological worldview premised on resistance to the United States and Israel.[23] As Iranian Supreme Leader Ayatollah Ali Khamenei once said, “We will support and help any nations, any groups fighting against the Zionist regime across the world.”[24] Iran’s Sunni allies Hamas and Palestinian Islamic Jihad are cases in point. Yet despite sharing common enemies with some Syrian rebels, it may prove impossible for Iran to befriend the same forces it helped attack during the past two years. Anti-Shi`a, anti-Persian sentiment is rife among Syria’s rebels, and the attraction of future Iranian financial support is eclipsed by the deeper pockets of Saudi Arabia and Qatar.

What is paramount for Tehran is that Syria remains an Iranian strategic “resistance” ally and a way-station to Hizb Allah in Lebanon. While Iran’s ideal endstate—the status quo ante, which is al-Assad regaining control over all Syrian territory—appears outside the realm of possibilities, for Tehran the key questions are how long can al-Assad hold Damascus, how much Iranian support will it require, and what happens if he loses power? According to one assessment, Iran’s supply routes to Hizb Allah via Syria could be maintained even if al-Assad only maintains control of Damascus, Homs, and the coast. If al-Assad falls, proxy groups might be able to protect supply lines if the opposition does not establish control over Syria’s borders.[25]

Implications of Rouhani’s Election in Iran
While Iran’s alliance with the al-Assad regime has endured for more than three decades, the biggest question in the coming months is whether the surprise election of “moderate” cleric Hassan Rouhani will alter Iran’s strategy in Syria. More specifically, does Rouhani have the will, ability or interest in changing Iran’s Syria policy? Publicly, Rouhani has expressed solidarity with the al-Assad regime, declaring in a recent meeting with visiting Syrian Prime Minister Wael al-Halqi that “the Islamic Republic of Iran aims to strengthen its relations with Syria and will stand by it in facing all challenges. The deep, strategic and historic relations between the people of Syria and Iran…will not be shaken by any force in the world.”[26] In private, however, a former senior Rouhani aide was far more equivocal about Tehran’s continued support for al-Assad. The best way to resolve U.S.-Iranian tensions in Syria, he argued, is to find a “Syrian Karzai”—a Sunni Arab politician palatable to Tehran, Washington, and the Syrian people.[27]

While Rouhani’s desire to alter Iran’s approach to Syria is questionable, his ability to do so is even more uncertain. The officials who manage Iran’s Syria policy—namely, current Qods Force commander Qasem Soleimani—do not report to Rouhani, but answer to Ayatollah Khamenei. Given Syria’s centrality to another indispensable resistance ally, Hizb Allah, one official Iranian source said that those who believe that Rouhani can alter Tehran’s patronage of Hizb Allah are “either naïve or daydreamers…Whoever the president is, whoever the ministers are, Hizb Allah will still be the same Hizb Allah to Iran. Hizb Allah to Iran isn’t a card to play with. Hizb Allah today is the crown jewel of the resistance bloc; presidential moderation doesn’t mean giving up the nation’s strengths.”[28]

In this context, it appears highly unlikely that Iran will abandon its support for the al-Assad regime in the near future. For U.S. policymakers, Iran’s unabashed support for al-Assad is a mixed blessing. Iranian support prolongs al-Assad’s shelf-life and further tarnishes U.S.-Iran tension and mistrust, making a potential nuclear accommodation less likely. At the same time, it simultaneously darkens Iran’s regional reputation among Sunnis and hemorrhages it financially, weakening its ability to project power and influence throughout the Middle East.

Karim Sadjadpour is a Senior Associate at the Carnegie Endowment for International Peace. He is author of Reading Khamenei: The World View of Iran’s Most Powerful Leader. He was a visiting fellow at the American University of Beirut in 2003-2004 and frequently visited Syria.

[1] For an excellent account of the origins of the Iran-Syria alliance, see Jubin M. Goodarzi, Syria and Iran: Diplomatic Alliance and Power Politics in the Middle East (New York: I.B. Tauris, 2009).

[2] These quotes are excerpted from the following study: Will Fulton, Joseph Holliday and Sam Wyer, “Iranian Strategy in Syria,” Institute for the Study of War and the American Enterprise Institute, May 2013.

[4] “If it weren’t for Syria’s active government,” said former Iranian Foreign Minister Ali Akbar Velayati, “the country would become like Qatar or Kuwait. Iran is not prepared to lose this golden counterweight.” See ibid.

[15] “‘Everyone on this trip was either a Guard or a Basij militia. This wasn’t a regular tour group,” said an employee of the tour agency that organized the trip. See ibid.

[17] Ibid. For the most up-to-date and in-depth study on Iran’s role in Syria, see Fulton et al.

[23] For more on this argument, see Karim Sadjadpour and Firas Maksad, “Syria’s Fate Hinges on Whom It Hates Most, U.S. or Iran?” Bloomberg, February 5, 2013.