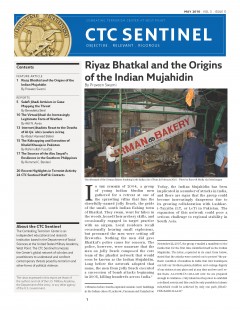 On April 18, 2010, U.S. and Iraqi forces killed al-Qa`ida in Iraq (AQI) chief Abu Ayyub al-Masri (also known as Abu Hamza al-Muhajir) and Islamic State of Iraq (ISI) leader Abu `Umar al-Baghdadi.[1] The deaths marked another blow to AQI, which also lost its previous leader, Abu Mus`ab al-Zarqawi, to a U.S. airstrike in June 2006. U.S. General Ray Odierno, the commander of U.S. forces in Iraq, said that the killings were “potentially the most significant blow to al-Qaeda in Iraq since the beginning of the insurgency.”[2]

In addition to damaging the organizational capabilities of AQI, the deaths caused an immediate reaction on jihadist internet forums. Jihadist sympathizers and other forum users at first refused to believe Iraqi government claims that the two leaders were killed, especially since there had been numerous false reports of their deaths in the past. Yet when the ISI announced the martyrdom of the two men, it became clear that U.S. and Iraqi forces had succeeded in decapitating the leadership of AQI and the ISI.

This article focuses on the online reaction to the deaths of Abu Ayyub al-Masri and Abu `Umar al-Baghdadi, examining the initial reactions of online jihadist forum users, statements on the deaths from other jihadist groups, and how jihadist forum users viewed the future of the Iraqi jihad in the wake of the recent setbacks.

Online Jihadist Reaction to the Deaths

In response to the Iraqi government’s initial announcement on the deaths of al-Masri and al-Baghdadi, online jihadists expressed disbelief. Members on various jihadist internet forums claimed that Iraqi Prime Minister Nuri al-Maliki’s statement was government propaganda against al-Qa`ida, similar to past statements erroneously announcing the arrest of al-Baghdadi.

This response changed, however, after the ISI’s Ministry of Religious Affairs admitted that both al-Baghdadi and al-Masri had in fact been killed. The ISI assured the Islamic world that it remained in good hands and had already appointed new leadership. The statement, signed by Abu al-Waleed Abdul Hadi al-Mashhadani, reportedly said, “If Allah fated that the two sheikhs be killed at this particular time, know that they left a unique generation behind, one that was raised before their eyes.”[3] The ISI also released a separate statement that read,

Here we accept congratulations for the martyrdom of the war lions…Amirs of Jihad. They paid their dues and raised our heads high…they put the U.S. and its collaborators in the dirt. We will continue on the same path. No backing down now. Don’t turn away. Be as quiet as death and solid as steel. The world is digging its own grave.[4]

After it became clear that U.S. and Iraqi authorities succeeded in killing the heads of AQI and the ISI, jihadist forum contributors called for revenge. One forum member challenged “the infidels,” warning that jihad would never stop. The user reminded readers of how even the death of Abu Mus`ab al-Zarqawi in 2006 did not quell AQI’s activities in Iraq. “Will jihad retract?” he asked.

Previously, when al-Zarqawi was killed, some thought jihad would cease in Iraq. At the time of al-Zarqawi’s death, the Iraqi political situation was somewhat stable, but jihad continued. Presently, Iraq is in a political vacuum, rendering better chances for the mujahidin to carry out attacks.[5]

On a separate forum, another user called for revenge, warning that the United States “will not dream of or live in safety until we [the Islamic community] live it in Palestine and in all of the Islamic countries from Andalusia to China.”

Yet on one jihadist forum, a long exchange between users revolved around questions of tradecraft. “How could the security forces know the whereabouts of the most important leaders of the Islamic State of Iraq?” asked one user. A number of users in this exchange demanded to know who called the meeting between al-Masri and al-Baghdadi, as that person was likely a traitor to the Islamic cause and was working for the U.S. and Iraqi governments.

Other frustrated forum contributors felt that al-Qa`ida’s media wings have been lying to its adherents concerning the success of the campaign in Iraq. These users argued that the deaths of al-Baghdadi and al-Masri reveal that al-Qa`ida is weak and that its cells are not connected through proper communications networks. They argued that al-Qa`ida’s propaganda and lies were aimed at luring more recruits. “If the news is true, it means one thing,” was the refrain among users in this camp.

Al-Qa`ida’s media wing is lying and spreading false information on the Iraqi arena. It’s holding back the fact that al-Qa`ida is weak and its members are living in an incinerator with no communication means with other cells. The depletion of al-Qa`ida is imminent. Everybody is tired of al-Qa`ida’s stupidity.[6]

Another jihadist user, Marzook, who is known as being against the ISI, said, “The death of the ISI’s top two men in one hole shows the bankruptcy of the organization and the contraction of the Iraqi arena.”

Reaction from Jihadist Groups on the Deaths

Various Sunni jihadist groups released statements concerning the deaths of al-Masri and al-Baghdadi. On April 28, 2010, a statement from Ansar al-Islam appeared on jihadist web forums offering condolences to “the brothers” in the ISI and to the Islamic world. The statement said that al-Masri and al-Baghdadi were “competent jihadists and fighters. They abandoned their world, not their religion.” Labayk Media, an outlet of the Taliban and al-Qa`ida, issued a statement on April 25 stating, “Today we say farewell to two jihadist figures…who fought the enemy.”[7] The statement assured that “the war has ups and downs and has not yet ended…God is our supporter…Our fallen ones are in heaven, while theirs are in hell.”[8]

Another jihadist group that offered condolences was Jaysh al-Umma, which is based in the Palestinian Territories. The Salafi-jihadi group released a statement expressing “condolences and even congratulations” over the martyrdom of al-Baghdadi and al-Masri.[9] The message warned that anyone who thinks “jihad would stop” with the death of a courageous leader is “wrong.”[10]

Various other Sunni jihadist groups across Iraq and elsewhere echoed these statements. Members of one Sunni jihadist group in Iraq, the al-Siddiq Army, apparently decided to join the ISI out of tribal allegiance.[11] Many jihadist forum participants believe that more jihadists in Iraq who belong to other groups will join the ISI in solidarity in the wake of the leadership decapitation.

Outlook for the Future

The majority of jihadist forum users were quick to assure that AQI, yet not necessarily the ISI, would remain strong in the wake of the latest setbacks. Some of these users, who claimed direct connection to the physical battlefield, wrote that the new AQI leadership is more experienced and will take advantage of the current political vacuum in the country. They believe that AQI and the ISI can be strengthened by exploiting the rivalries between Iraq’s many political groups.
Users also hoped that the Taliban in Afghanistan and Pakistan would support al-Qa`ida in avenging the recent assassinations in Iraq. On April 27, 2010, for example, the al-Qa`ida-affiliated al-Shabab insurgent group in Somalia attacked an army base in Mogadishu with an explosives-laden truck. A spokesman for al-Shabab, Ali Mahmud Raji, said after the attack,

This operation was carried out to avenge the blood of our two heroic martyrs, God willing, Shaykh Abu `Umar al-Baghdadi, his minister the lion Abu Hamza al-Muhajir and the blood of everyone else that was with them when the cowards struck them.[12]

The statement included a picture of one of the purported suicide bombers, holding a flyer that read, “In revenge of the Emir of the Islamic State of Iraq and his war minister Abu Hamzeh al-Muhajir.”[13]

More significant, on May 1, 2010, Pakistani-American Faisal Shahzad allegedly attempted to detonate a car bomb in New York City’s Times Square. Shortly after the failed attack, a Pakistani Taliban statement appeared on jihadist web forums claiming responsibility for the attack as revenge for the deaths of al-Baghdadi and al-Masri in Iraq.[14] Despite the claim of responsibility, however, the extent of outside involvement in Shahzad’s attempted terrorist attack is not yet clear, as other Pakistani Taliban factions rejected involvement in the plot, and investigations are not yet complete on whether Shahzad acted alone. Moreover, based on various journalist investigations into his past, Shahzad himself had reportedly become radicalized long before AQI’s latest setbacks in Iraq, sending out angry e-mails to friends about U.S. foreign policy after the 9/11 attacks.[15]

On May 15, 2010, the ISI purportedly announced that it has appointed new leaders to replace those lost in the U.S.-Iraqi operation that killed al-Baghdadi and al-Masri.[16] According to the statement, the new leaders are “Abu Bakr al-Baghdadi al-Husseini al-Qurashi, the Emir of the Believers of the Islamic State of Iraq” and “Sheikh Abu Abdullah al-Hassani al-Qurashi is his prime minister and deputy.”[17] The ISI had already announced a new minister of war, Abu Suleiman, who will replace Abu Ayyub al-Masri, who served that role in addition to being the head of AQI. Abu Suleiman vowed revenge for the killings of al-Masri and al-Baghdadi, warning of “a long gloomy night and dark days colored in blood” and urging followers not to “become accustomed to having a loose hand on the trigger.”[18]

Leadership decapitations clearly have an effect on terrorist and militant groups. Whether or not the latest killings will put an end to AQI and the ISI remains an open question. Devastating bombings continue to rip through Iraq, with militants feeding off tensions between the country’s myriad political groups and factions. On May 10, for example, bombings, assassinations and ambushes tore through the country, killing at least 119 people and underscoring the pervasive threat.[19] It is clear from jihadist web forums that many remain hopeful about the insurgency in Iraq despite the recent setbacks. Whether those hopes will be borne out on the ground remains to be seen.

Abdul Hameed Bakier is the former head of crisis management and terrorist negotiations in Jordan’s Counter-Terrorism Unit of the General Intelligence Department. At the GID, he also worked on international counterterrorism issues. Currently, he is active in monitoring jihadist internet traffic for counterterrorism analysis groups.