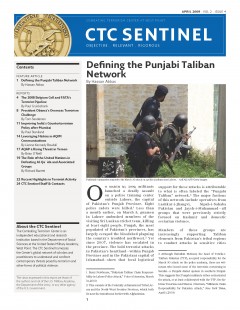 March 1, 2009 (IRAQ): The mayor of Samarra, Mahmoud al-Khalaf, was wounded when a roadside bomb struck his convoy. – Reuters, March 1

March 2, 2009 (PAKISTAN): A suicide bomber killed six people at a religious school for girls in Balochistan Province. Pakistani press reports stated that the attacker wanted to assassinate a senior leader of Jamiat Ulema-i-Islam-Fazl (JUI-F), who was scheduled to speak at the school. The JUI-F leader was not harmed in the attack. – Bloomberg, March 3; Daily Times, March 3

March 3, 2009 (PAKISTAN): Gunmen in Lahore, the capital of Punjab Province, attacked the visiting Sri Lankan cricket team as it was being driven to the Gadaffi Stadium. The attack, which occurred in daylight, left at least seven Pakistanis dead. Six members of the Sri Lankan team, along with a British coach, were injured. Lashkar-i-Jhangvi and Jaysh-i-Muhammad were suspected of being behind in the attack. – Independent, March 4; Reuters, March 4; UPI, March 6

March 5, 2009 (PAKISTAN): Taliban militants blew up 16 stores selling DVDs and music in Takht Bhai town northwest of Peshawar. There were no casualties as the explosives were detonated during the night of March 4-5. – AFP, March 4

March 5, 2009 (PAKISTAN): Suspected Taliban militants blew up the mausoleum of 17th century Sufi saint Abdul Rahman Mohmand, also referred to as Rahman Baba, in Peshawar. According to one press report, “Caretakers of the complex said they had received a warning letter from purported Taliban militants three days before the attack threatening to blow up the mausoleum if women continued to visit it.” – Washington Times, March 14

March 7, 2009 (PAKISTAN): Tribal officials in South Waziristan claim that Taliban militants shot down a low-flying unmanned aerial drone. The U.S. military denied that one of its unmanned aircraft was shot down. – AFP, March 7

March 7, 2009 (SOMALIA): Shaykh Hassan Yaqob, spokesman for the al-Shabab factions that control Kismayo and the southern Jubba regions, told reporters that his fighters are “no threat” to neighboring Kenya. He said that “there is ongoing propaganda intended to destroy the security and order of the Jubba regions.” – Garowe Online, March 7

March 8, 2009 (IRAQ): A suicide bomber driving an explosives-laden motorcycle blew himself up near a police academy in Baghdad, killing 28 people. The Islamic State of Iraq later took credit for the operation in an online statement. – New York Times, March 8; AFP, March 11

March 10, 2009 (SOMALIA): Somalia’s cabinet voted to implement Shari`a law across the country. The proposal will now be presented to the parliament for final approval. – Reuters, March 10

March 11, 2009 (UNITED STATES): Officials at the FBI and National Counterterrorism Center testified before Congress that “tens” of Somali-Americans, primarily from Minneapolis, have traveled to Somalia to fight with the Islamist militant group al-Shabab. One of the recruits included a 27-year-old male who blew himself up in a suicide attack. According to FBI national security official Philip Mudd, however, “These folks aren’t going over there to become part of terrorist cells.” Nevertheless, officials could not rule out the possibility that some of the recruits could eventually return and attack the United States. – Reuters, March 11

March 11, 2009 (YEMEN): Yemen charged 16 suspected al-Qa`ida operatives with forming an al-Qa`ida cell that planned a series of attacks, including a March 2008 attack on the U.S. Embassy in Sana`a. The men—14 Yemenis and two Syrians—were arrested on separate occasions during 2007 and 2008. – AP, March 11

March 12, 2009 (THAILAND): Thailand announced that it will be sending 4,000 additional troops to the south in an effort to quell an intensifying insurgency. The Thai prime minister acknowledged that the mission in the south has so far been “unsuccessful.” – TNA, March 12

March 14, 2009 (GLOBAL): Al-Jazira broadcast a new audiotape purportedly by al-Qa`ida chief Usama bin Ladin. During the recording, Bin Ladin accused some Arab leaders of being “complicit” with Israel and the West in a “Crusader-Zionist alliance against our people.” Bin Ladin urged a holy war to liberate the Palestinian Territories and also called on jihadists to liberate Iraq from the U.S. military. He called the recent Israeli intervention in Gaza a “holocaust.” – AFP, March 14

March 16, 2009 (PAKISTAN): A suicide bomber killed 14 people in the garrison city of Rawalpindi. The bomber detonated his explosives outside a restaurant. – AFP, March 16

March 16-17, 2009 (PHILIPPINES): Philippine troops fired on suspected Abu Sayyaf Group rebels who have been holding three Red Cross officers hostage since January 15 in the southern Philippines. A military spokesman said, “Two bodies of the Abu Sayyaf were recovered by the operating troops and have been positively identified as sub-leader Jul Asbi Jalmaani and Mudar Hadjail, his trusted man. Seven others are believed wounded or dead in the fighting.” The hostages, however, are still being held captive. – Reuters, March 16; Mindanao Examiner, March 17

March 18, 2009 (YEMEN): A suicide bomber attacked a convoy of South Korean officials investigating the March 15 attack that killed four Korean tourists in Yemen. The South Korean ambassador to Yemen was in the convoy at the time of the latest attack. No one in the convoy was injured. – AP, March 18

March 19, 2009 (AFGHANISTAN): Dad Mohammad Khan, a key anti-Taliban lawmaker from Helmand Province, was killed along with four others after a bomb ripped through their vehicle in Helmand. According to one report, “The killing took to 10 the number of MPs who have died in attacks since they were elected in Afghanistan’s first democratic parliamentary vote in 2005.” – AFP, March 19

March 20, 2009 (AFGHANISTAN): Taliban and police clashed in northern Jawzjan Province, on the border with Turkmenistan. Nine Afghan policemen and a district chief were killed. – AFP, March 19

March 23, 2009 (PAKISTAN): A suicide bomber detonated his explosives in Islamabad, killing a policeman. It appeared the bomber wanted to enter a police station before detonating his explosives, but was stopped at the gate. – Washington Post, March 24

March 24, 2009 (GLOBAL): Al-Qa`ida second-in-command Ayman al-Zawahiri released a new videotape, in which he urged the Sudanese people to prepare for a “long guerrilla war” in light of the International Criminal Court’s decision to charge Sudanese President Umar al-Bashir with war crimes. “The Sudanese regime is too weak to defend the Sudan, so you must do what was done by your brothers in Iraq and Somalia,” al-Zawahiri said. He stated that he was “not defending Umar al-Bashir or his regime…the issue is one of making excuses for more foreign interference in the Muslims’ countries in the framework of the contemporary Zionist Crusade.” – Bloomberg, March 24; CNN, March 24

March 25, 2009 (GLOBAL): The U.S. government offered up to $11 million in rewards to find or capture Baitullah Mehsud, Sirajuddin Haqqani, and al-Qa`ida operative Abu Yahya al-Libi. All three men are believed to be operating in the Afghanistan-Pakistan region. – AFP, March 25

March 25, 2009 (YEMEN): Yemen’s Interior Ministry released a statement claiming it had arrested six men for plotting attacks against foreigners in the country. The statement said that the men were recruited by al-Qa`ida. – AP, March 25

March 26, 2009 (AFGHANISTAN): A suicide bomber prematurely detonated his explosives as he was “saying good-bye to his associates” before his mission, killing six militants. The incident occurred in Helmand Province. – Reuters, March 26

March 27, 2009 (PAKISTAN): A suicide bomber blew himself up inside a mosque in Khyber Agency of the Federally Administered Tribal Areas, killing at least 50 people. – Voice of America, March 27

March 28, 2009 (ALGERIA): Al-Qa`ida in the Islamic Maghreb (AQIM) demanded that 20 of its members be released from detention in Mali and other countries in exchange for the release of six Western hostages. AQIM says that it is holding two Canadian diplomats kidnapped in Niger in December, along with four European tourists kidnapped in Mali in January. – Reuters, March 28

March 31, 2009 (PAKISTAN): Tehrik-i-Taliban chief Baitullah Mehsud vowed to “amaze everyone in the world” with an attack on Washington, D.C. The Federal Bureau of Investigation, however, said Mehsud has made similar threats before and that they had not seen any indications of an imminent plot on Washington. – AP, March 31