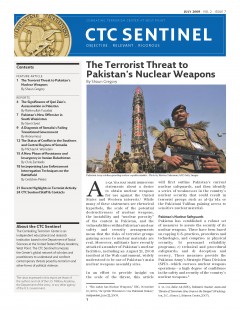 June 1, 2009 (UNITED STATES): Muhammad Ahmad Abdallah Salih, an inmate held at Guantanamo Bay, was found dead in an apparent suicide. The 31-year-old Yemeni, who was accused of fighting with the Taliban in Afghanistan and of associating with al-Qa`ida, had been held at Guantanamo Bay since February 2002. – The Australian, June 3

June 1, 2009 (PAKISTAN): Taliban militants kidnapped dozens of students and staff from a Pakistani Army preparatory school in North Waziristan Agency of the Federally Administered Tribal Areas. Hours later, on June 2, as the militants were moving the captives to South Waziristan Agency, Pakistani Army soldiers attacked them and managed to free the hostages. Estimates placed the number of freed hostages at 80. – Washington Post, June 2

June 2, 2009 (GLOBAL): Al-Qa`ida second-in-command Ayman al-Zawahiri released a new audio recording in which he criticized U.S. President Barack Obama on the eve of the president’s visit to Egypt. Al-Zawahiri called Obama a “criminal” who is coming to Egypt with “deception” and “to obtain what he failed to achieve on the ground after the mujahidin ruined the project of the Crusader America in Iraq, Afghanistan and Somalia.” He also assured that Obama’s “bloody messages…will not be concealed by public relations campaigns or by farcical visits or elegant words.” – AFP, June 2

June 3, 2009 (GLOBAL): Al-Jazira broadcast a new audiotape purportedly from Usama bin Ladin, in which the al-Qa`ida leader said that “[President] Obama has followed the footsteps of his predecessor in increasing animosity toward Muslims and increasing enemy fighters and establishing long-term wars. So the American people should get ready to reap the fruits of what the leaders of the White House have planted throughout the coming years and decades.” The statement was released as President Barack Obama arrived in the region for a Middle East tour. – New York Times, June 3

June 3, 2009 (AFGHANISTAN): A suicide bomber on a motorcycle blew himself up near the Pakistan border in Kandahar Province. The explosion killed five security guards escorting a NATO convoy. – Voice of America, June 3

June 3, 2009 (NORTH AFRICA): British Prime Minister Gordon Brown said that there was “strong reason to believe” that al-Qa`ida in the Islamic Maghreb (AQIM) executed a British hostage on May 31. The hostage, Edwin Dyer, was likely kidnapped from Niger on January 22, and then reportedly held in Mali. The government refused to agree to AQIM’s demand that it free a prominent Muslim cleric, Abu Qatada, in exchange for Dyer’s release. – AFP, June 3

June 5, 2009 (PAKISTAN): A suicide bomber killed 38 people at a mosque in Upper Dir District of the North-West Frontier Province. The incident caused hundreds of tribesmen in the area to launch an offensive against Taliban militants, who they blamed for the attack. – AFP, June 5; BBC, June 8

June 6, 2009 (PAKISTAN): Two pro-Taliban clerics were killed during a shootout between security forces and militants in Mardan District of the North-West Frontier Province. Security forces had custody of the two clerics at the time, and were transporting them to Peshawar when militants ambushed the convoy. One soldier was also killed in the incident. – Reuters, June 6

June 9, 2009 (UNITED STATES): Ahmed Khalfan Ghailani, a suspected terrorist held at Guantanamo Bay, arrived in New York to face criminal prosecution for his role in the August 1998 U.S. Embassy bombings in Kenya and Tanzania. Ghailani is the first Guantanamo detainee to arrive in the United States for prosecution. – Reuters, June 9

June 10, 2009 (SYRIA): Lawyers for senior al-Qa`ida ideologue Mustafa Setmariam Nasar, also known as Abu Mus`ab al-Suri, told Reuters that the ideologue is imprisoned in Syria. Nasar was captured in Pakistan in 2005, although his whereabouts since then have been unclear. – Reuters, June 10

June 11, 2009 (PAKISTAN): Two militants on motorcycles threw a grenade on a road in Peshawar. When police came to investigate the scene, a suicide bomber blew himself up, killing three people. – IANS, June 11

June 11, 2009 (PHILIPPINES): Philippine authorities arrested Ansar Venancio, who was allegedly involved in the December 30, 2000 bombing of a commuter train in Manila that killed 22 people, in addition to an attack in 2003 on an international airport in Davao city. Venancio is considered a bomb expert with Jemaah Islamiya. – AFP, June 11

June 12, 2009 (IRAQ): Harith al-`Ubaydi, the leader of the largest Sunni bloc in Iraq’s parliament, was assassinated by a gunman outside a Baghdad mosque. The gunman, who was a teenager, was killed after he exploded a grenade while fleeing authorities. – TimesOnline, June 12; AP, June 13

June 12, 2009 (AFGHANISTAN): A suicide bomber blew himself up amid a group of fuel tankers in Helmand Province, causing fires to at least six tanker trucks and killing at least eight Afghan drivers. The trucks were intended for international troops in the country. – Voice of America, June 13

June 12, 2009 (PAKISTAN): Prominent anti-Taliban cleric Sarfraz Naeemi was killed by a suicide bomber in Lahore, the capital of Punjab Province. Three of his followers were also killed by the bomber. Within minutes of the attack, a second suicide bomber blew up at a mosque in Nowshera District of the North-West Frontier Province. The second attack killed four people. Tehrik-i-Taliban Pakistan took credit for both attacks. – Washington Post, June 13; AFP, June 12

June 14, 2009 (PAKISTAN): The governor of Pakistan’s North-West Frontier Province announced that Pakistan’s military will carry out an offensive against Pakistani Taliban leader Baitullah Mehsud and his militia. – Reuters, June 14

June 14, 2009 (YEMEN): Yemeni authorities announced the arrest of a Saudi al-Qa`ida financier who they consider “one of the most dangerous members of al-Qa`ida.” The financier, Hassan Hussein bin Alwan, was arrested the previous week. – AFP, June 14

June 15, 2009 (YEMEN): The mutilated bodies of two German nurses and a South Korean teacher were discovered by shepherds in Yemen’s Saada region. Later in the day, six other foreigners were found dead. The nine foreigners—who all worked for World Wide Services Foundation, a Dutch relief group—disappeared on June 12. It was not immediately clear who was responsible for the murders. – Independent, June 15; Christian Science Monitor, June 15; AP, June 15

June 16, 2009 (MALI): Security forces in Mali captured a suspected guerrilla base for al-Qa`ida in the Islamic Maghreb. The base was in the Sahara Desert near the Algerian border. During the operation, 12 militants and five soldiers were killed. – BBC, June 17; AFP, June 16

June 17, 2009 (AFGHANISTAN): Three Danish soldiers were killed after a bomb ripped through their vehicle in Helmand Province. – AFP, June 17

June 17, 2009 (PAKISTAN): Armed tribesmen in Upper Dir District of the North-West Frontier Province killed six suspected Taliban militants. The tribesmen were part of a group of 3,000 who formed a lashkar (militia) to fight against Taliban forces to avenge the 38 people killed in a suicide bombing at a mosque on June 5. – AFP, June 17

June 17, 2009 (THAILAND): Thai Prime Minister Abhisit Vejjajiva said that he does not believe the insurgency in southern Thailand is linked to the al-Qa`ida network. – Bangkok Post, June 17

June 18, 2009 (SOMALIA): A suicide bomb ripped through the Medina Hotel in central Somalia’s town of Beledweyne, killing the country’s internal security minister, Omar Hashi Aden, in addition to 49 other people. Omar Hashi Aden arrived in central Somalia earlier in the month to lead operations against Islamist opposition fighters in the region. A number of other government officials were also killed in the blast. – Voice of America, June 18; Bloomberg, June 18

June 19, 2009 (PAKISTAN): New York Times journalist David Rohde managed to escape his Taliban kidnappers and safely find his way to authorities. Rohde had been held hostage by the Taliban for seven months. He was kidnapped outside Kabul, but escaped from a compound in North Waziristan Agency of the Federally Administered Tribal Areas. – ABC News, June 22; New York Times, June 20

June 22, 2009 (GLOBAL): Al-Qa`ida’s commander for Afghanistan, Shaykh Sa`id Mustafa Abu’l-Yazid, told al-Jazira television that the group would use Pakistan’s nuclear weapons against the United States if it was able to acquire them. He said, “the Americans will not seize the Muslims’ nuclear weapons and we pray that the Muslims will have these weapons and they will be used against the Americans.” – UPI, June 22

June 22, 2009 (UNITED STATES): U.S. District Court Judge Richard Leon ordered a detainee at Guantanamo Bay to be released. Leon said that Syrian Abd al-Rahim Abdul Rassak was a captive, not a follower, of the Taliban and at one point was tortured by al-Qa`ida. – AP, June 22

June 22, 2009 (RUSSIA): A suicide bomber injured the president of Russia’s Muslim region of Ingushetia. Ingush President Yunus-Bek Yevkurov’s convoy was attacked by the bomber, and his driver was killed. – Reuters, June 22

June 23, 2009 (MAURITANIA): A U.S. aid worker was shot to death in the Mauritanian capital of Nouakchott. Al-Qa`ida in the Islamic Maghreb later took credit for the killing. – Reuters, June 23; Voice of America, June 25

June 25, 2009 (UNITED STATES): The U.S. government announced that it was providing Somalia’s Transitional Federal Government with an “urgent supply” of weapons and ammunition. – AFP, June 27

June 26, 2009 (PAKISTAN): A Taliban suicide bomber blew himself up next to an army vehicle in Pakistani Kashmir, killing at least two soldiers. It reportedly marked the first suicide attack by a Taliban militant targeting Pakistani soldiers in Pakistani Kashmir. – AP, June 26

June 30, 2009 (AFGHANISTAN): A male suicide bomber disguised as a woman in a burqa blew himself up at the Torkham border crossing in Nangarhar Province, killing a police officer and a child. – Voice of America, June 30

June 30, 2009 (PAKISTAN): A group of Pakistani Taliban fighters in North Waziristan Agency pulled out of a peace deal with the Pakistan government, citing U.S. drone attacks and a Pakistan Army offensive as the reasons for their decision. – al-Jazira, June 30