Held Hostage: Analyses of Kidnapping Across Time and Among Jihadist Organizations 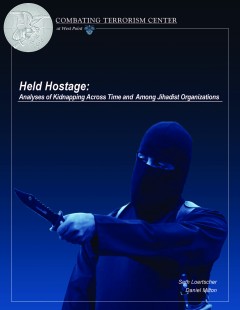 In March 2013, David Haines and Frederico Motka were kidnapped while traveling together near the Turkish border in Syria. The men were both foreigners and aid workers. They were held in the same prison by the same militant group. Yet they suffered sharply different fates. In May 2014, Motka was released, while four months later, Haines became the fourth Westerner to be beheaded by the Islamic State. Press accounts noted that the major difference between the men was their nationality: Motka was Italian; Haines was British.

In the summer of 2014, the Islamic State began its campaign of public executions of kidnapped Westerners. Though these barbaric acts captured the world’s attention, hostage taking is not new. Nevertheless, research designed to increase understanding of this threat is limited. Most discussions regarding kidnappings rely on anecdotal evidence, and a more detailed analysis of key questions regarding the role of group type, nationality of the victim, and outcome as they relate to kidnapping incidents has been lacking for want of publicly available data.

In an effort to address this, the CTC presents “Held Hostage: Analyses of Kidnapping Across Time and Among Jihadist Organizations,” which examines trends related to the kidnapping of Westerners by jihadist groups based on data from a newly gathered open-source dataset of the kidnapping of Westerners from 2001–2015. The CTC has also publicly released the data along with this report (click here to access the database). We believe that the report and accompanying data will be an important resource for policymakers, practitioners, and academics interested in this area.

Watch an overview of the project, its findings, and its implications:

French journalist Nicolas Hénin was kidnapped by the Islamic State in June 2013 and held hostage for 10 months. Watch his interview with the CTC here: