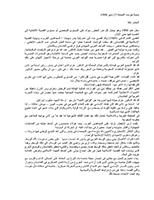 This is a fragment of a 294 page book written by Mustafa Hamid titled “The Airport 90″ which is part of sears titled “Chatter on the World’s Rooftop.” Mustafa Hamid details the Battle of Torghar, and analyzes the importance of Torghar for the fight to take Khost, as well as the military development of the mujahidin during the campaign. Mustafa Hamid narrates in great detail the process by which the mujahidin took over Torghar mountain in February 1990, and acquired a strategic advantage over Communist forces in the siege of Khost. As a journalist, at the end of 1989, Hamid decides to work with Jalaladin Haqani to produce a jihadi magazine, Manba’a al-Jihad. Some parts of the document are essays from that magazine. Before his trip to Torghar, Hamid sends his wife and children to Islamabad, after they are subject to harassment in Peshawar. Hamid is suspicious of Pakistan’s intentions for the mujahidin, and blames that country’s Inter-Services Intelligence Directorate (ISI) for the catastrophic loss at Jalalabad. In the last section, Hamid analyzes the failed coup against Afghan leader Najibullah on 6 March 1990, which he sees as emblematic of larger problems. This document is a prequel to AFGP-2002-600092 titled “A Mother’s Deep Sorrow/The Airport Project.”