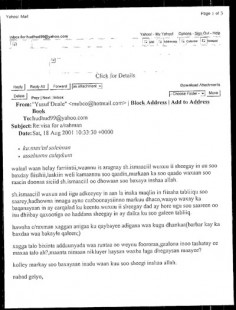 This document consists of a series of three consecutive emails in which Yusuf Du`ale and Muhammad S. Bare discuss acquiring a visa to an unknown country for Sheik Ismail `Abd al-Rahman. It is unclear where Bare and Du`ale are writing, but given the mention of Somali men in the August 16 email one may infer that they are possibly Somali and located in the region. It is also unclear from which country they are attempting to attain the visa.