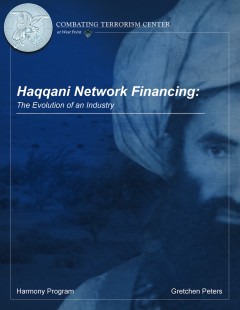 The CTC’s latest report leverages captured battlefield material and the insights of local community members in Afghanistan and Pakistan to outline the financial architecture that sustains the Haqqani faction of the Afghan insurgency.  The Haqqani network is widely recognized as a semi-autonomous component of the Taliban and as the deadliest and most globally focused faction of that latter group.  What receives far less attention is the fact that the Haqqani network also appears to be the most sophisticated and diversified from a financial standpoint.  In addition to raising funds from ideologically like-minded donors, an activity the Haqqanis have engaged in since the 1980s, information collected for this report indicates that over the past three decades they have penetrated key business sectors, including import-export, transport, real estate and construction in Afghanistan, Pakistan, the Arab Gulf and beyond.   The Haqqani network also appears to operate its own front companies, many of which seem to be directed at laundering illicit proceeds.  By examining these issues this report demonstrates how the Haqqanis’ involvement in criminal and profit-making activities has diversified over time in pragmatic response to shifting funding conditions and economic opportunities, and how members of the group have a financial incentive to remain the dealmakers and the enforcers in their area of operations, a dynamic which is likely to complicate future U.S. and Afghan efforts to deal with the group.

This document is the cover of a Pashto-language version of Manba al-Jihad, a magazine released by Jalaluddin Haqqani from 1989-1993. ...

This collection of documents includes a Pakistani domicile certificate for Bakhta Jan; an admission and discharge sheet for a Pakistani...

This collection of documents includes a Pakistani domicile certificate for Sher Jan, a car title, and several letters.  This material...