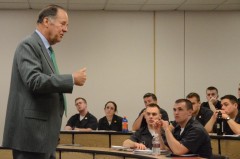 Governor Thomas H. Kean, former Governor of New Jersey, came to the Combating Terrorism Center at West Point, on 2 April 2012, to speak to cadets in SS464: Homeland Security and Defense about his experience as the Chairman of the National Commission on Terrorism Attacks Upon the United States (the 9/11 Commission). 35 cadets attended the lecture. Gov. Kean discussed how he was selected to fill his post, his approach to leading a bipartisan committee of such importance and high visibility, and his assessment of both the most rewarding and challenging aspects of this monumental effort. Cadets were highly engaged and asked numerous questions relating to leadership, bipartisanship, and lessons learned about our actions before, during, and after the events of 9/11. | Governor Kean received the center’s briefing and participated in a round table with CTC personnel and faculty.