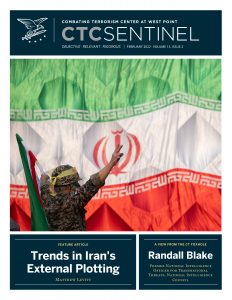 Notwithstanding the possibility of a deal soon being reached to revive the JCPOA nuclear deal with Iran, nefarious activity by Iran continues to pose significant counterterrorism and security concerns. In this month’s feature article, Matthew Levitt examines trends in Iranian external assassination, surveillance, and abduction plots based on a dataset of 98 Iranian plots from 1979 through 2021. Levitt notes that “perhaps the most important finding to emerge from this study is the fact that Iran pursues international assassination, abduction, terror, and surveillance plots in a very aggressive fashion, even at times and in places that are particularly sensitive. With the exception of a period right after the 9/11 attacks … Iranian operatives and proxies have carried out operations even during periods of key negotiations—including current negotiations over a return to the JCPOA.” He adds: “Today, with the revolutionary leadership solidifying control over key elements of power in Iran, and with an eye toward protecting the revolution at a time when the revolutionary leadership sees increasing threat coming from elements both foreign and domestic, operations like these are likely to increase.”

Charlie Winter and Abdullah Alrhmoun assess the trajectory in Syria of the Islamic State in the wake of its fluctuating fortunes so far this year. The group’s multi-day assault on Ghwayran prison in northeastern Syria was “by a significant margin, the highest impact and most complex operation launched by the Islamic State in Syria since its territorial defeat.” But just days later, the Islamic State’s leader, who had orchestrated the prison attack, was ‘removed from the battlefield’ during a U.S. raid. Winter and Alrhmoun’s analysis of Islamic State attack claims in Syria since the group’s territorial defeat in March 2019 “suggests Islamic State cadres in Syria may have been saving their energies to carry out a large strike, cutting through the notion that previous declines in operational activity were a sign of weakening or that the prison attack necessarily portends a resurgence.” They add: “In Syria, the Ghwayran prison attack was an example of the latent threat posed by the Islamic State exploding into view. Whatever the monthly ebb and flow of Islamic State operations in Syria, the group is likely to persist as a threat for the foreseeable future.”