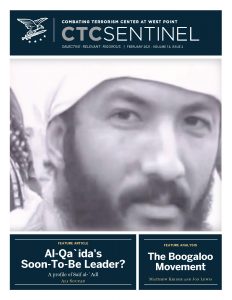 From the Editor
In this month’s feature article, Ali Soufan provides a comprehensive profile of Saif al-`Adl, an Egyptian charter al-Qa`ida member who could soon become the group’s third emir. Soufan writes that “with the confirmed deaths of Hamza bin Ladin and Abu Muhammad al-Masri, as well as the reported (but as yet unconfirmed) demise of al-Qa`ida’s second emir, Ayman al-Zawahiri, the likely next in line to inherit the leadership is … Saif al-`Adl. Like the late Abu Muhammad, Saif lives in Iran and is apparently restricted from leaving the country. Little is known about his current movements or activities. Nevertheless, Saif’s revered status within the movement, as well as his deep experience as a military, intelligence, and security leader and a terrorist planner, make him a potentially dangerous emir.”

In this month’s feature analysis, Matthew Kriner and Jon Lewis assess that the Boogaloo movement “has quickly evolved into a significant domestic violent extremist threat” with “an accelerationist faction within Boogaloo” seeking to “instigate decentralized insurrectionary violence.” They write that the movement “is best conceptualized as a decentralized, anti-authority movement composed of a diverse range of actors,” including white supremacists, neo-Nazis, militia movement members, accelerationists, and ultra-libertarians, who are mobilized in part by the “belief that they are following in the footsteps of the United States’ founders and participating in a revolution against tyranny.”

Johannes Saal and Felix Lippe provide a case study of the November 2020 Vienna terrorist attack. They write that “the Vienna attacker, Kujtim Fejzulai, grew up in the city he attacked and had longstanding connections within the jihadi extremist milieu in Austria as well as jihadi contacts in other European countries and further afield. His two failed attempts to join the Islamic State overseas and the failure of efforts to deradicalize him after he was convicted for seeking to join the group underline the threat that can be posed by failed jihadi travelers and terrorist convicts after their release, as well as the difficulties in rehabilitating jihadi prisoners.”

Hassan Abbas writes that “even as Pakistan has made progress in reducing the threat from terrorist sanctuaries in the Pakistan-Afghanistan tribal areas, an increased crime-terror nexus in urban centers and a new terrorist recruitment drive by Islamic State Khorasan province, or ISK, in Baluchistan has raised alarms. Tehrik-i-Taliban Pakistan (TTP) is trying to stage a comeback, and sectarianism is also rising, creating a congenial environment for terrorist and extremist organizations, including some Kashmir-focused groups that have evaded counterterrorism scrutiny.”

The Evolution of the Boogaloo Movement