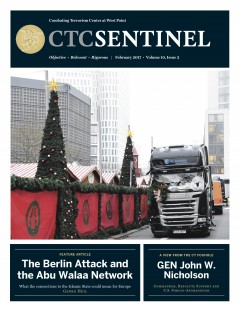 In an extensive interview, General John W. Nicholson, commander of Resolute Support and U.S. Forces-Afghanistan, stresses the importance of preventing the country from again becoming a platform for international terrorism, noting counterterrorism operations have almost halved the fighting strength of the Islamic State’s local affiliate. He also outlines the ongoing effort to empower Afghan efforts against the Taliban, saying: “They’re at a bit of a stalemate. The government holds about two-thirds of the population. The enemy holds a solid 8 to 10 percent. … We think [if] we get to about 80 percent or more, we start to reach a tipping point where the insurgency becomes more irrelevant.”

Our cover story by Georg Heil focuses on the deadly truck attack this past December in Berlin by Anis Amri, a Tunisian extremist suspected of links to Islamic State operatives in Libya. Investigations have made clear the danger posed by the radical network he belonged to in northwestern Germany led by an Iraqi preacher named Abu Walaa. It is believed to have recruited dozens to travel to join the Islamic State, communicated extensively with Islamic State operatives in Syria and Iraq, and encouraged attacks on German soil. Heil argues the high level of interconnectedness between these radicals in Germany and the Islamic State has potentially grave implications for European security.

Aymenn al-Tamimi looks at the implications of the recent realignment of rebel and jihadi groups in Syria, which created two potentially conflicting power centers revolving around an enlarged Ahrar al-Sham and Hay’at Tahrir al-Sham, a new al-Qa`ida-aligned umbrella grouping. Robin Simcox finds Islamic State plots by pre-teens and teens are increasing in the West, with plotters in contact with the group in a majority of such cases. Shashi Jayakumar examines the growing Islamic State threat to Southeast Asia, arguing the group may pose as big a threat in the future in the East as in the West. Andrew McGregor warns growing clashes between Fulani Muslim herders and settled Christian communities in Nigeria could be exploited by terrorist groups and potentially destabilize the entire Sahel-West Africa region.

The Fulani Crisis: Communal Violence and Radicalization in the Sahel