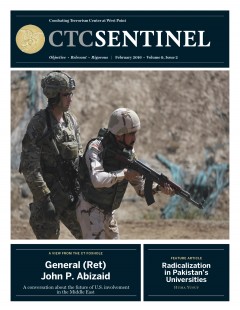 From the Editor
In our interview, General (Ret) John Abizaid, the longest-serving commander of United States Central Command, warns the United States is losing ground in the fight against Islamist terror and needs, in concert with its international allies but still in a leadership role, to develop a comprehensive strategy to defeat the threat militarily and ideologically by drawing on all aspects of U.S. power. Abizaid argues that stopping the spread of Islamist extremism in “what used to be” Syria and Iraq, and the sectarianism on which it feeds, should be the primary goal of U.S. policy in the region. Our other cover story by Huma Yusuf documents the growing concern about radicalization on university campuses in Pakistan. While Pakistan has made progress in the fight against militants in the border region with Afghanistan, she warns that a growing cohort of educated extremists may have international security implications.

Drawing on never-before analyzed primary sources, Kevin Bell looks back at the Islamic Emirate of Kunar, a short-lived Salafi proto-state founded in eastern Afghanistan in 1990 that he argues provides some pointers on the degree to which the region may be fertile ground in the future for the Islamic State in Khorasan. Mohammed Hafez outlines how tightening security environments are encouraging jihadis to turn increasingly to the family unit for recruits. Barak Barfi examines the military doctrine of the Islamic State and explains how despite the recruitment of a significant number of former officers in Saddam Hussein’s army, there are significant differences with the Ba’athist approach. Making use of information revealed in recent terrorism trials, Guido Steinberg sheds new light on Junud al-Sham, a Chechen jihadi group fighting in Syria, and the more than 30 German extremists that trained and fought with it, some of whom may now pose a threat to their home country. Finally, we feature a landmark study by Mia Bloom, John Horgan, and Charlie Winter, which shows that the Islamic State’s use of children for military purposes is increasing.

Depictions of Children and Youth in the Islamic State’s Martyrdom Propaganda, 2015-2016

The Ties that Bind: How Terrorists Exploit Family Bonds

The First Islamic State: A Look Back at the Islamic Emirate of Kunar