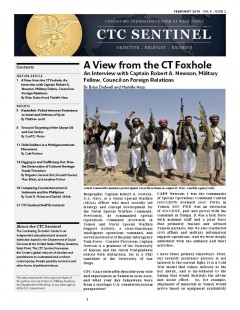 A View From the CT Foxhole: An Interview With Captain Robert A. Newson, Military Fellow, Council on Foreign Relations
By Brian Dodwell and Marielle Ness

In the second iteration of the CTC Sentinel’s series of interviews with counterterrorism practitioners, we talk to Captain Robert A. Newson, U.S. Navy, a Naval Special Warfare (SEAL) officer who most recently led strategy and concept development for the Naval Special Warfare Command. Previously, he commanded Special Operations Command (Forward) in Yemen. In the interview, he discusses his experiences in Yemen in 2010-2012 and provides valuable insight regarding a variety of key U.S. counterterrorism issues, to include security assistance, advise and assist efforts, intelligence sharing, and equipping for small wars.

A View From the CT Foxhole: An Interview With Captain Robert A. Newson, Military Fellow, Council on Foreign Relations

Hezbollah: Pulled between Resistance to Israel and Defense of Syria

Terrorist Targeting of the Libyan Oil and Gas Sector

The Role of Child Soldiers in a Multigenerational Movement

Digging In and Trafficking Out: How the Destruction of Cultural Heritage Funds Terrorism

Comparing Counterterrorism in Indonesia and the Philippines