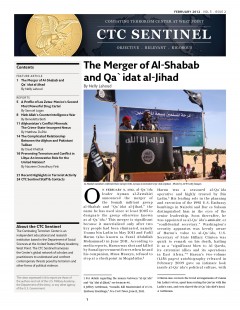 On February 9, 2012, al-Qa`ida leader Ayman al-Zawahiri announced the merger of the Somali militant group al-Shabab and “Qa`idat al-Jihad,” the name he has used since at least 2005 to designate the group otherwise known as al-Qa`ida. This article reflects on what it took for this merger to occur. It discusses al-Shabab’s past unrequited courtship of al-Qa`ida, most notably its 2009 pledge of allegiance to Bin Ladin, as well as the significance of Fadil Harun to both al-Shabab and al-Qa`ida. The article concludes by speculating whether Harun’s death was, in fact, an accident, or whether he was double-crossed by al-Shabab’s leaders to curry favor with al-Zawahiri to obtain the acceptance that Bin Ladin had denied them.

The Merger of Al-Shabab and Qa`idat al-Jihad

The Complicated Relationship Between the Afghan and Pakistani Taliban

Preventing Terrorism and Conflict in Libya: An Innovative Role for the United Nations?