Edges of Radicalization: Ideas, Individuals and Networks in Violent Extremism 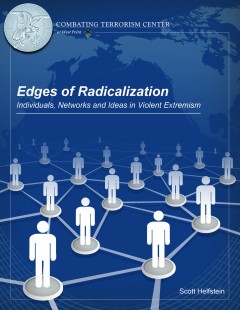 The Combating Terrorism Center (CTC) at West Point is pleased to announce the release of a new report entitled “Edges of Radicalization: Ideas, Individuals and Networks in Violent Extremism,” by Scott Helfstein.

This paper examines radicalization as a social phenomenon through the behavior of individuals and networks. Violent extremists, individuals pursuing political change through violence, remain committed to striking the U.S. homeland and its interests abroad. It is important to understand how radical ideas spread to counter or contain this immediate and persistent threat. This study argues that the spread of violent extremism cannot be fully understood as an ideological or social phenomenon, but must be viewed as a process that integrates the two forces in a coevolutionary manner. The same forces that make an ideology appealing to some aggrieved group of people are not necessarily the same factors that promote its transfer through social networks of self-interested human beings. This means that there is value in differentiating why radical ideologies resonate among individuals, and how individuals come to adopt and advocate those ideas. This report helps contextualize the current terrorist threat, the role of technology in radicalization, and next steps in decoding radicalization.