Drawing the Right Lessons from Israel’s War with Hizb Allah 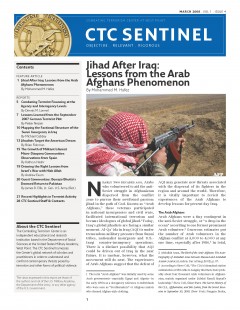 A recent article in USA Today announced that the U.S. military was learning from Israel’s 2006 war against Hizb Allah in southern Lebanon. The lesson, at first, seems to be clear. “Counterinsurgency tactics,” USA Today reported, “could leave U.S. forces vulnerable to the kind of coordinated attacks that stymied Israel” [1]. Echoing these concerns and writing in World Politics Review on March 4, West Point professor Gian Gentile argued that the U.S. Army had already become like the Israeli Defense Forces (IDF), “so focused on irregular and counterinsurgency warfare that it can no longer fight large battles against a conventional enemy” [2]. Is this true, and is the U.S. military drawing the correct lessons from the 2006 war?

It is impossible to gauge the degree to which the U.S. Army’s conventional combat skills have been eroded by the focus on counter-insurgency warfare in Iraq and Afghanistan. It is certainly likely that the high operations tempo, endless deployments and shortened training schedules have more to do with any erosion in collective task proficiencies than counter-insurgency manual FM 3-24. Yet, the U.S. military is almost certainly drawing the wrong lessons from the 2006 war if it is used to ignore the hard won lessons of counter-insurgency and revert back to the kind of conventional war-fighting with which the U.S. military has always been more comfortable.

Drawing the wrong lessons has happened before. In the aftermath of the Vietnam War, the presence of a conventional threat from the Soviet Union allowed the U.S. Army and Marine Corps to shelve the counter-insurgency lessons learned during more than a decade of fighting in Southeast Asia. Counter-insurgency warfare, as John Nagl is fond of saying, is “graduate level warfare.” Intellectually, then, it was easier for the U.S. Army officer corps to go back to defending the Fulda Gap against imaginary Soviet tank divisions using the same tactics employed in the Second World War. In the same way, the belief that the United States might someday fight like Israel did in 2006 is being used by some to argue for a reversion back to what the U.S. military does best and finds easiest: conventional warfare.

That said, the comparison between the IDF and the U.S. Army and Marine Corps is admittedly tempting. Following Israel’s 2000 withdrawal from southern Lebanon, the IDF grew accustomed to operations in the Palestinian Territories which, in some ways, closely resemble the counter-insurgency operations currently being undertaken by the U.S. Army and Marine Corps in Iraq. The IDF then grew complacent and rusty. Furthermore, although many units performed admirably in southern Lebanon, as a whole the IDF was caught off-guard by the kind of fighting they experienced there. The reserves, especially, were poorly prepared and inadequately equipped.

There are several reasons, however, why this analogy does not hold as much water as some would like. First, the U.S. Army and Marine Corps are not the IDF. Whereas the U.S. military, post-Vietnam, is a professional military, the IDF is still largely manned by conscripts. While the IDF soldier’s ferocity, patriotism and tactical decision-making have often been noted as being among his strengths, individual soldier discipline is rarely mentioned as a trait for which the IDF soldier is praised. Some units take particular pride in their indiscipline and scruffy appearance. This may have positive effects on morale in some cases. Yet, in asking how Hizb Allah intercepted Israeli communications during the 2006 war, it is worth noting that in cases when encrypted communication failed, IDF soldiers simply used their personal cellular phones to communicate on the battlefield [3]. It is hard to imagine a U.S. Marine Corps gunnery sergeant allowing a similar situation.

In the same way, it is similarly hard to imagine the U.S. military’s professional and non-commissioned officer corps allowing the kind of institutional complacency that haunted the IDF in the years following 2000. Simply put, the cultural differences between the U.S. military and the IDF—and the differences between conscripted armies and professional armies—must be taken into account before any comparison is made between historical experiences.

The greatest mistake the U.S. military can make in studying the lessons of 2006, however, is to study the 34 days of fighting that took place in southern Lebanon in July and August of that year without any context. Nevertheless, this seems to be what is happening.

In the same way, the U.S. military’s insistence upon only studying the tactical lessons provided by the 34 days of open fighting between the IDF and Hizb Allah is also misguided. As U.S. Army Captain Daniel Helmer persuasively argues in his study of the IDF’s failed counter-insurgency efforts in southern Lebanon from 1982 to 2000, Israel never dealt with the root political problems in southern Lebanon that led to the rise of Hizb Allah [4]. The 2006 war did not take place in a 34-day vacuum; it was merely the latest bloodshed in a dispute between Israel and Hizb Allah that has been fought with varying degrees of intensity since 1982.

Finally, unless the Mexican government dissolves and a modern-day Pancho Villa begins to lob Katyusha rockets across the border into Texas, it is unlikely the U.S. military will ever face an adversary exactly like Hizb Allah. Yet, in more general terms, Israel’s war against Hizb Allah belongs to the kind of conflicts that political scientist Erin Simpson labels “hybrid wars” [5]. These wars occur when nation-states go to war against non-state or sub-state actors and combine elements of conventional warfare with characteristics of irregular warfare. Although air power enthusiasts such as Major General Charles Dunlap have argued for a more robust use of air power in unconventional war, historical evidence suggests that air power based punishment strategies such as that employed by Israel in 2006 are not effective against guerrilla groups in hybrid wars [6].

Mastering hybrid warfare means mastering the tactics found in both FM 3-24 and FM 7-8. U.S. Army and Marine Corps units must be proficient in both conventional combined arms combat as well as the kind of population-centric approach encapsulated in the new counter-insurgency doctrine. This is clearly asking a lot of the officer corps, but perhaps not any more than what has been asked of it already in Iraq and Afghanistan.

Hybrid warfare also means civilian and strategic decision-makers must be realistic about what military power alone can accomplish in such conflicts. By all accounts, the IDF was sent into southern Lebanon with an impossible mission—to “destroy” Hizb Allah. By 2006, however, Hizb Allah had grown into a political-military organization claiming the loyalty of perhaps 1.5 million Lebanese Shi`a. Hizb Allah runs schools, manages hospitals and elects members of parliament. No military on the planet could have been expected to destroy the organization in 34 days of fighting.

In some wars, history teaches us that you cannot shoot or kill your way to victory. As U.S. Army Colonel H.R. McMaster has written, “the principal lesson of the wars in Afghanistan, Iraq and southern Lebanon might be that military campaigns must be subordinate to a larger strategy that integrates political, military, diplomatic, economic and strategic communication efforts” [7]. Guns, bombs and tactics from the Second World War are simply not enough. This has been the harsh lesson of the U.S. military’s counter-insurgency campaigns since 2001, and this is also the enduring lesson of Israel’s war with Hizb Allah.

Andrew Exum is a graduate of the University of Pennsylvania and the American University of Beirut. He is currently a Ph.D. candidate in the War Studies Department at King’s College London where he studies Hizb Allah and military innovation theory. A former U.S. Army officer, Mr. Exum led a platoon of light infantry in Afghanistan (2002) and then a platoon of Army Rangers in Iraq (2003) and Afghanistan (2004). He is the author of This Man’s Army: A Soldier’s Story from the Front Lines of the War on Terrorism (2004) and “Hizballah at War: A Military Assessment” (2006).