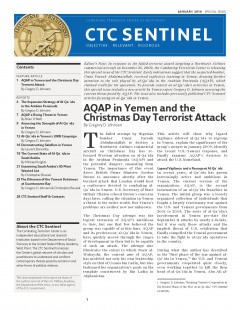 * This article was originally published in the February 2009 issue of the CTC Sentinel.

In the middle east, Salafism has gained prominence during the last two decades. This is especially true in countries such as Kuwait and Saudi Arabia where a political version of Salafism, often labeled sahwa, emerged as a significant social movement.[1] In Yemen, however, the main Salafist trend is characterized by an apparently apolitical stance. It was developed by Muqbil bin Hadi al-Wadi`i in the early 1980s around the Dar al-Hadith institute in the small town of Dammaj in Sa`da Province. Al-Wadi`i was a cleric educated in the 1960s and 1970s at various Saudi religious institutions (including the famous Islamic University of Medina) and maintained ambiguous links with that country’s rulers and religious elites until his death in July 2001.[2] Rapidly, Dar al-Hadith expanded and educated thousands of students coming from Yemen and abroad; other institutes spawned in other regions of the country. Theoretically, the main features of that version of Salafism include a claim of loyalty to the political ruler (amir, king or president) even when that ruler is corrupt and unjust, as well as a will to transcend local and national contexts by delivering a universal message based exclusively on the Qur’an and the hadith. These Yemeni Salafists aim to preserve Muslims from strife by not engaging in politics, nor participating in elections, demonstrations, or revolutions. Yet, they believe they can play a role in orienting state policies through advice given in private to the ruler.

Such positions clearly distinguish Yemeni Salafism from other Islamist trends and figures—including radical Muslim Brotherhood-associated figures such as ‘Abd al-Majid al-Zindani[3]—who at least formally endorse elections and are stigmatized as sources of division and corruption by al-Wadi`i’s followers. Apolitical Salafists typically condemn violence and terrorist operations targeting civilians. In fact, al-Wadi`i was highly critical of the jihadist strategy at the global level as well as inside Yemen from the early 1990s onward. During that time, he accused Usama bin Ladin, who was then trying to launch new wars after Afghanistan, of preferring to invest in weapons rather than in mosques. He even apparently botched some of Bin Ladin’s planned operations against the socialist elites of South Yemen.[4]

While bridges between apolitical Salafists (or “purists,” as Quintan Wiktorowicz describes them[5]) and armed movements may exist, its frequent association with jihadist groups or its depiction as the antechamber of terrorism can be misleading. By focusing on the issue of violence, this article intends to show how the Salafist doctrine is often flexible and reinterpreted by clerics and activists.

Yemen’s Salafists as Allies of Government?

In the post-9/11 period and after al-Wadi`i’s death, condemnation of violence became a way for Yemen’s Salafist movement to legitimize its position in a precarious context. Such a condemnation was obviously not new but grew more explicit as state repression became a possibility.[6] Saudi sources condemning terrorism written by clerics close to the official religious establishment became more and more popular inside of Yemen.[7] Essentially, these sources blamed the politicized Islamist groups such as the Muslim Brotherhood and some political Salafists—including famous Kuwaiti cleric ‘Abd al-Rahman ‘Abd al-Khaliq and Syrian Muhammad Surur Zayn al-‘Abidin—for upsurges of violence. They also considered al-Qa`ida an anomaly.

In such a context, the wide spectrum of Salafists in Yemen was eager to stress the fact that it would not endorse violent strategies against the state or its allies. Abu’l-Hasan al-Ma’ribi, the leader of a dissident Salafist fringe and writer of an anti-terrorism manifesto,[8] along with his rival, Yahya al-Hajuri, supported Yemeni President `Ali `Abdullah Salih’s reelection for a new term during the 2006 presidential ballot. A few years before, Muhammad al-Imam, probably the most charismatic heir of al-Wadi`i, had delivered a speech at a conference in 2003 indirectly condemning jihad in Iraq against the U.S.-led occupation.[9] He claimed that in order to be legitimate, jihad had to be endorsed by the Yemeni government, which as a new ally of the United States in the “global war on terrorism” would obviously not do. Such an assertion considered Yemenis leaving for Iraq as illegitimate fighters.

Through these steps, Salafists undoubtedly transformed themselves into allies of the Yemeni government in a matter that was reminiscent of the Saudi religious authority’s capacity to endorse its state’s policies and decisions in all circumstances. Despite their conservative and radical interpretation of Islamic jurisprudence, the Salafists appeared as advocates of loyalty or even moderation and as actors able to efficiently delegitimize violent strategies through theological arguments.

This image, however, is incomplete, and it obscures many of the practical inconsistencies of the Salafist movement in Yemen. Deeds might at times appear to directly contradict the peaceful and apolitical doctrine. In parallel to such condemnations of violence, Salafist individuals have supported actions against various other political and religious groups, including socialists[10] and Sufis.[11]

The brutal rebellion  in Sa`da between the national army and a group of Zaydi revivalists[12] headed by Husayn al-Huthi and then his kin since June 2004 emerged as another way for the Salafists to portray themselves as companions of the government. It also highlighted the Salafists’ potential for violence. Indeed, Salafists actively participate in the stigmatization of Zaydi identity. Their propaganda often associates Zaydism to Iran and to a global Shi`a conspiracy that seeks to divert the Muslim world.[13] In March 2007, two foreign students of the main Salafist center, Dar al-Hadith in Dammaj, were killed, supposedly in combat against Zaydi groups in the wider framework of the war against the “Huthis.”[14] These killings confirmed the rumors that Salafist groups assisted the Yemeni army in the war.

From a more global perspective, the positions defended by many Salafist clerics regarding the issue of jihad outside of their country (or more precisely outside of the Arab world) also show that both apoliticism and pacifism are not automatic options and that positions have been shifting. A clear example of internal practical contradictions appeared when al-Wadi`i’s endorsement of jihad in the Molucca Indonesian Islands in 2000[15] is confronted to his earlier criticism of Muslim Brotherhood Yemeni clerics, such as ‘Abd al-Wahhab al-Daylami who labeled the 1994 war against the socialist-led secession a holy war. For al-Wadi`i, this was not the case, as labeling the war in this way would cause Muslim civilian casualties.

Although September 11, 2001 and other operations were generally considered illegitimate and wrong since they had, in retaliation, fostered further casualties and war in the Muslim world, the condemnation of violence targeting Western interests is not systematic. In fact, the principle of confrontation between the West and the Muslim world is usually something that is acknowledged and supported. Nevertheless, in the dominant apolitical Salafists’ perspective, use of violence is considered counterproductive: Muslims are first of all not ready to fight as they are too weak and divided, and Muslim governments have not raised “the banner of jihad,” so fighting would only cause turmoil. In that context, while the general objective of targeting a dominant West might be supported, it can only be attained in the long run; all current attempts are then bound to fail and as such are negative.

In various instances, al-Wadi`i showed an anti-imperialist rhetoric not very different from that of al-Qa`ida-type groups. In a 1996 conference, for example, he asked God to destroy America by sending “a heroic nation like the people of Afghanistan who destroyed Russia,” yet he denies being a terrorist, claiming he “is even incapable of shooting a gun correctly.” Furthermore, in the same conference he said the Salafists “are currently preparing the people to fight America through jihad” and recalled how “America corrupted the nations by supporting the governments and the tribes but never the Salafis.”[16] Rather than a double standard discourse, these variations are better understood as ways of dealing with potential repression by not appearing as dangerous proponents of overt violence, while at the same time showing the movement’s independence of speech in order not to lose its legitimacy among activists.

The ambiguous positions expressed by Yemeni Salafist clerics would tend to suggest that apolitical Salafists and jihadist groups only diverge in matters of strategy. Consequently, apolitical Salafism (such as the one forged by al-Wadi`i and his successors) would, according to this argument, be considered the antechamber of terrorism or its ideological roots. While not systematically incorrect (John Walker Lindh, the famous “American Taliban,” allegedly spent time in al-Wadi`i’s institute in Dammaj before leaving for Pakistan),[17] such an interpretation is biased. Indeed, it misinterprets the profile of most jihadist militants in Yemen as they in fact seldom have a strong religious background and do not use the apolitical Salafist clerics as legitimizing sources for their actions.[18] Drawing a genealogy of violence through the writings of Salafist clerics is therefore insufficient as it often means overlooking the environment in which these ideas are either produced or reinterpreted. For example, the case for loyalty is only bearable as long as the Salafists are not themselves the main victims of authoritarianism and indistinct criminalization. That is precisely what al-Wadi`i meant when he said:

If I am censored, there will be strong reactions…That is why I advise the government not to do it. You were courageous when people abroad accused you of harboring terrorists and you answered “No, we only have `ulama’ that teach the Qur’an and the sunna.” My brothers, I tell you, if the government was intelligent, it would leave us alone.[19]

As such, state repression and torture are probably more efficient incentives for violence than any given doctrine. As a fugitive militant accused of involvement in various attacks (including the one on the U.S. Embassy on September 17, 2008) asserted in a press interview, “The operations that are happening in Yemen are reactions from young people tyrannized by torture in the prisons.”[20] While these words should be interpreted cautiously, they nevertheless show how the general political context plays a fundamental role. It is largely this context that will most often determine whether the Salafists, from the apolitical starting point, will be violent or will stick to the principle of strict loyalty to the state, or possibly start playing a more overtly political and inclusive game.

Dr. Laurent Bonnefoy is a CNRS/ANR post-doctoral fellow at the Institut de Recherches et d’Etudes sur le Monde Arabe et Musulman (IREMAM – University of Provence, France). A specialist of religious movements in the Arabian Peninsula, he is currently conducting more fieldwork in Yemen and has written various academic articles in French and English on Salafism and on the political effects of the “Global War on Terror” in Southern Arabia.

[12]  Zaydism is a branch of Shi’ism present in the Yemen highlands. The elites of this religious sect, which claimed to be descendants of the Prophet Muhammad (the sayyids), ruled, under the authority of the imam, over parts or the whole of Yemeni territory for more than a millennium, until the 1962 Republican Revolution. Since then, Zaydism has been in crisis and has experienced important theological and political evolutions, some of which blunted the main features that distinguished it from Sunnism.