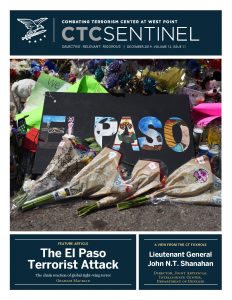 The final two years of this decade witnessed a wave of far-right terror attacks around the world, including the October 2018 synagogue shooting in Pittsburgh, Pennsylvania; the March 2019 gun attacks on mosques in Christchurch, New Zealand; the April 2019 Poway, California, synagogue shooting; the August 2019 attack targeting the Hispanic community at a Walmart in El Paso, Texas; and the October 2019 Halle, Germany, shootings, in which a synagogue was targeted.

In our feature article, Graham Macklin examines the El Paso attack, which he assesses was “part of a chain reaction fomented within the violent sub-cultural online milieus of right-wing extremism.” He writes: “This digital ecosystem is fueling a cumulative momentum, which serves to lower ‘thresholds’ to violence for those engaged in this space, both in the United States and elsewhere, as one attack encourages and inspires another.”

The Halle shootings appear to have also been part of this chain reaction. In a case study, Daniel Koehler writes that the far-right extremist who carried out the shootings in the eastern German town “appears to be mainly a copycat attacker inspired by previous incidents” such as the shootings in Christchurch, Poway, and El Paso. Koehler writes: “The Halle attack reflects and evidences several trends, including the internationalization of right-wing terrorism and lone-actor terrorists fashioning their own weapons. The attack stood out because it was the first time a terrorist appears to have used homemade firearms.”

Our interview is with Lieutenant General John “Jack” Shanahan, the director of the Joint Artificial Intelligence Center at the U.S. Department of Defense. In that role, he is responsible for accelerating the delivery of artificial intelligence-enabled capabilities, scaling the department-wide impact of AI and synchronizing AI activities to expand joint force advantages.

Tore Hamming draws on court documents from a recently completed trial to examine the 2016 Copenhagen ‘Matchstick’ terror plot. The failed conspiracy saw an Islamic State ‘virtual planner’ based in Syria connect and direct two Syrian refugees living in Sweden and Germany. The case provides insights on the evolving jihadi terror threat in the West and its transnational dimension. Hamming writes: “The plot presented obvious challenges for Western security institutions. Central to its planning and execution were the virtual planner and the availability of instructions on how to construct explosives.”

The Halle, Germany, Synagogue Attack and the Evolution of the Far-Right Terror Threat