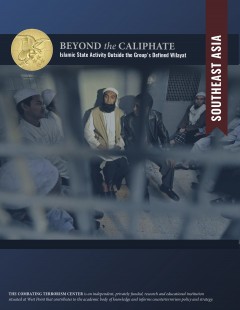 On 2 June, the Combating Terrorism Center published the second report in its Beyond the Caliphate series, which seeks to evaluate how the Islamic State’s influence, operational reach, and capabilities are changing in areas that fall outside of its physical caliphate. Focusing specifically on Southeast Asia, the report identifies trends in attacks, plots, and support activity (ending in arrest) linked to and inspired by the Islamic State in the region from June 2014 through April 2017.

Both the first Beyond the Caliphate report (on Turkey) and the new report on Southeast Asia are available here.