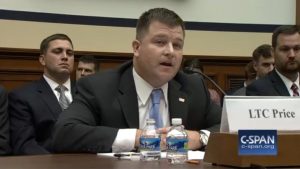 On 21 September, Combating Terrorism Center Director LTC Bryan Price testified before the House Armed Services Committee during a hearing on the state of counterterrorism 15 years after the September 11, 2001, attacks. LTC Price, who testified alongside former U.S. Ambassador to Iraq and Turkey James Jeffrey and senior advisor to the president of RAND Corporation Brian Michael Jenkins, discussed the nature and evolution of the terrorist threat over the last 15 years and lessons learned during this long-term fight. For more, click here.

LTC Price is pictured during a hearing in the House Armed Services Committee on the state of counterterrorism 15 years after 9/11.