Counter-Terrorism Issues for the Next President 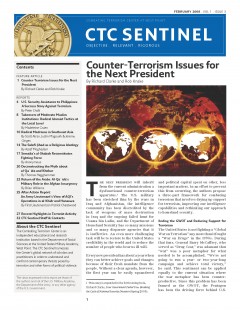 The next president will inherit from the current administration a dysfunctional counter-terrorism apparatus [1]. The U.S. military has been stretched thin by the wars in Iraq and Afghanistan, the intelligence community has been discredited by the lack of weapons of mass destruction in Iraq and the ongoing failed hunt for Usama bin Ladin, and the Department of Homeland Security has so many missions and so many disparate agencies that it is ineffective. An even more challenging task will be to restore to the United States credibility in the world and to reduce the number of people who bear us ill will.

Every new president has about a year when they can better achieve goals and changes because of their fresh mandate from the people. Without a clear agenda, however, the first year can be easily squandered and political capital spent on other, less important matters. In an effort to prevent this from occurring, the authors propose a three-part framework for combating terrorism that involves drying up support for terrorism, improving our intelligence capabilities and rethinking our approach to homeland security.

Ending the GWOT and Reducing Support for Terrorism

The United States is not fighting a “Global War on Terrorism” any more than it fought a “War on Drugs” in the 1990s. During that time, General Barry McCaffrey, who served as “Drug Czar,” was adamant that “war” was a poor metaphor for what needed to be accomplished. “We’re not going to run a year- or two-year-long campaign and achieve total victory,” he said. This sentiment can be applied equally to the current situation where the war metaphor has been counter-productive. Since this problem has been framed as the GWOT, the Pentagon has been the driving force behind U.S. counter-terrorism policy. Yet, the military is a sometimes ineffective tool. As General David Petraeus has noted, sometimes the best weapons don’t shoot.

To defeat the al-Qa`ida movement, it must be recognized as a cancer infecting only a small percentage of the greater body of peace-loving Muslims worldwide. While eliminating the cancer is our end objective, our more immediate goal is to keep it from spreading. Yet many of our actions aimed at capturing and killing terrorists have alienated wide swathes of the Muslim world. In short, what we have done to eliminate the cancer has served to spread it. The most important counter-terrorism tools are law enforcement, intelligence and ideology. When military action is called for, we must act swiftly and decisively, but in the context of defeating al-Qa`ida, smart bombs, cruise missiles and SEAL teams must be applied like a surgeon’s scalpel to prevent a counter-productive reaction among people affected by the collateral damage.

It is the authors’ judgment that removing U.S. troops from Iraq is the single biggest step we can take to reduce support for al-Qa`ida and eliminate anti-U.S. sentiments across the globe. By ending the war in Iraq, we will remove a justifiable grievance that is the rallying cry for the al-Qa`ida movement. Other steps must include sincere efforts to bring peace to Israel and Palestine and to help our allies in the Muslim world move away from oppressive tactics of government. We should not, however, force democracy onto nations and cultures that are not prepared. Most importantly, we need to work with our Islamic friends to promote ideological counter-weights to al-Qa`ida.

Our reliance on military solutions to the threat posed by al-Qa`ida stems in part from the fact that our intelligence agencies have not been capable of offering adequate alternatives. The program needed to address our current intelligence needs is very different from the program we needed to fight and win the Cold War. That system relied heavily on our technological prowess. Defeating al-Qa`ida, however, will be largely about human intelligence. Breaking the cycle of intelligence failures will take a strong Director of National Intelligence (DNI) with experience in the intelligence community to shift the emphasis from the fiefdoms of expensive intelligence collection technologies to an integrated, analyst-driven structure. The new DNI must energetically pursue a series of new initiatives aimed at this purpose:

– Within that integrated budget, we need to further shift resources from traditional, costly satellite collection systems run by the NRO to fund other programs in cyberspace and in the field of human intelligence.

– The National Clandestine Service (NCS), our human spy agency, should continue its slow efforts to expand the use of Not Official Cover (NOC) [2] programs, but it should also recast our spying effort to reflect the reality that most information will continue to come from open sources, walk-ins and liaison services. Americans are not likely to become good at spying anytime soon and, therefore, the Clandestine Service should focus its efforts at enhancing what we can do well.

– The DNI must rationalize the roles, missions and capabilities of the various U.S. intelligence agencies when it comes to operating in cyberspace. Increasingly, the information spy agencies want to collect is in cyberspace, as are the controls for vital systems. The highly skilled personnel and sophisticated systems we need to operate in cyberspace are in such short supply that we cannot spread them out over dozens of military, defense and intelligence agencies.

– A relatively small, elite, highly trained and experienced professional intelligence analysis organization should serve the DNI and the president. This Intelligence Assessment Staff must be institutionally insulated from political pressures and it must be able to control intelligence collection to support its analysis efforts from being stolen.

– For intelligence agencies to be trusted by the citizenry, there must be a real program in which someone is actively monitoring those agencies to ensure that there is no abuse of laws or policies. Thus, the national security adviser and the DNI should create an active Executive Branch oversight program for all Intelligence Community efforts, especially the restricted covert action programs. The existing National Security Council staff mechanism for that oversight are weak and under-resourced.

The creation and subsequent dysfunction of the Department of Homeland Security reveals many of the reasons why the U.S. government fails so often at national security. For several years, during two administrations of different political parties, people engaged in federal management and in national security tried to resist a politically motivated drive to be seen to “do something” about security through bureaucratic reorganization. When, after the September 11 attacks, that drive became irresistible, the chief criteria in designing and managing the major new government enterprise was appearance and politics, not problem solving. The largest federal department created in more than 50 years was slammed together with insufficient resources and regulatory powers. Worse yet, far from recruiting the best managers that government and industry could assemble, it was laced with political appointees and contractors to a degree never seen before in any federal agency.

In order to make our homeland security apparatus work, we first need to break it up into manageable components. The drive to centralize everything related to homeland security under one roof showed a basic lack of understanding of how government agencies work. One person cannot lead an agency responsible for both screening airline passengers and responding to hurricanes. Instead, the organizing principle should consolidate around the functions the agencies perform:

– FEMA should be broken out and given responsibility as an independent agency for mitigating and responding to emergencies.

– Domestic intelligence functions within DHS and the FBI should be moved into a single new agency under the control of the DNI.

– The remaining components of DHS are largely uniformed, law enforcement entities responsible for border and immigration security and transportation security. These agencies should remain in the same organization but under a new and less Orwellian name, perhaps the Department of Border and Transportation Security (BTS).

During the past seven years, the federal government has thrown billions of grant dollars at cities and states without providing any guidance on how these funds should be used. The results have been less than impressive. At the same time, the federal government has cut support for local law enforcement. We need to establish clear goals for vulnerability reduction and capacity enhancement and develop three and five year plans to fund and meet them. One of the main goals in this effort must be to make local law enforcement a reliable part of our prevention efforts by funding intelligence positions in police departments dedicated to counter-terrorism and finding a formula to make fusion centers work.

The next president must make brokering the necessary compromises to secure the borders a top priority. This cannot be done without also creating a migrant worker program to reduce the number of illegal immigrants so that we can focus on the security threat posed by border crossings. This reform will also require establishing a secure credentialing system with civil liberties and privacy protections.

The Keys to Getting it Right

The agenda we have laid out is ambitious, especially since the president will be simultaneously addressing a host of other demanding issues including withdrawal from Iraq, responding to global warming and solving the health care crisis. Having a risk management system that is itself a high risk of failure, however, is not prudent. We are, after all, talking about the security of the United States, a national government’s first priority and one that must be done well.

In order to meet this demanding agenda, the next president will need to inspire, recruit and retain a new generation of civilian civil servants. Both the Department of Homeland Security and the Intelligence Community have outsourced too much of their mission to private contractors. National security requires a dedicated corps of professionals, appropriately trained and motivated to perform the essential functions of analysis, planning, contract oversight and crisis management. The people who perform these functions should not be contractors and they should not solely be political appointees. The next president must make it a priority to bring many of these jobs back “in-house” and work to attract the next generation of dedicated public servants.

Richard A. Clarke is the Chairman of Good Harbor Consulting LLC, a homeland security and cyber security consulting firm. Mr. Clarke served the last three presidents as a senior White House Advisor. Over the course of an unprecedented 11 consecutive years of White House service, he held the titles of: Special Assistant to the President for Global Affairs, National Coordinator for Security and Counterterrorism, and Special Advisor to the President for Cyber Security. Prior to his White House years, Mr. Clarke served for 19 years in the Pentagon, the Intelligence Community, and State Department. During the Reagan Administration, he was Deputy Assistant Secretary of State for Intelligence. During the Bush (41) Administration, he was Assistant Secretary of State for Political-Military Affairs and coordinated diplomatic efforts to support the 1990-1991 Gulf War and the subsequent security arrangements.

Robert K. Knake is a Director at Good Harbor Consulting where he specializes in homeland security and critical infrastructure protection. Mr. Knake joined Good Harbor after completing a master’s degree in international security studies at Harvard University’s Kennedy School of Government. Prior to his graduate studies, Mr. Knake was a research associate in national security studies at the Council on Foreign Relations. He received his BA in History and Government from Connecticut College in 2001.

[1] This essay is expanded in the forthcoming book, Richard Clarke, Your Government Failed You: Breaking the Cycle of National Security Disasters (Spring 2008).

[2] NOC refers to spies based outside of U.S. government facilities.