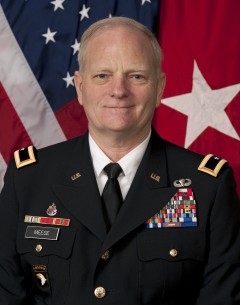 At the founding of the Combating Terrorism Center, BG(R) Meese was serving as the Deputy Head of the Department of Social Sciences.  Through Meese’s leadership and vision, the Center was formally established in 2003.  Today, BG(R) Meese serves as a senior mentor to the faculty and staff of the Center until his retirement in June 2013.  He has served in Afghanistan as the International Security and Assistance Force (ISAF) Deputy Chief of Staff for General David Petraeus as well as multiple tours in Iraq as a senior advisor to the Commander of Multinational Forces Iraq.

Brigadier General(R) Michael J. Meese is a former Professor and Head of the Department of Social Sciences at West Point where he led seventy military and civilian faculty members in the Department.