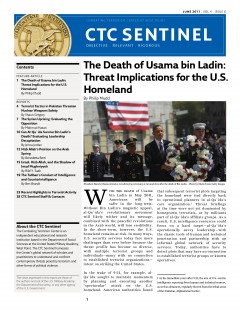 What will the death of Usama bin Ladin mean for the war on terrorism? While Bin Ladin’s death was a major tactical victory for the United States, decapitation alone rarely results in the demise of terrorist organizations. Killing Bin Ladin may destabilize al-Qa`ida temporarily, but his death is unlikely to be a significant blow to the organization.

This article examines the effectiveness of leadership targeting based on a dataset compiled by the author. It shows what factors determine whether leadership decapitation will be effective, and it concludes that the death of Bin Ladin is unlikely to weaken the al-Qa`ida terrorist group.

Research on Leadership Targeting
To assess the effectiveness of leadership decapitation against terrorist groups, the author compiled a dataset of 298 incidents of leadership targeting from 1945-2004. In brief, the findings suggest that decapitation is not an effective counterterrorism strategy. In fact, the rate of decline is lower for groups whose leaders have been killed or arrested. Moreover, in certain cases decapitation can have adverse and counterproductive consequences. Decapitation is the least effective in the context of groups that are older, religious, or relatively large.[1]

There are three key variables that can help determine whether and under what conditions decapitation is likely to be effective: an organization’s age, size, and type.

First, a group’s age was the strongest predictor of when decapitation results in group collapse. Older groups tend to withstand attacks on their leadership, and decapitation is counterproductive the older a group becomes. This variable was coded according to the year in which the organization began conducting terrorist activity and was coded in 10-year increments. The data shows that organizations under 10 years of age were the most susceptible to collapse. Decapitation is seven percent less effective than doing nothing for groups under 20 years of age, and becomes 20% less effective for groups between 20-30 years of age. Groups that had been active for more than 40 years were always resistant to collapse following the removal of a leader. There are strong reasons to expect that larger groups possess organizational attributes, which increase their resilience to counterterrorism measures in general.

Second, large groups are better able to regroup after the removal of leaders; decapitation rarely works against groups with more than 500 members. This variable is coded according to the number of active members. The smallest organizations, those with fewer than 100 active members, were susceptible to collapse. Generally, as a group gets larger, the success rate of decapitation declines. Once a group exceeds a membership of 500, the rate of decline is higher for groups that have not experienced decapitation. Decapitation essentially becomes counterproductive. For groups with between 500-1,000 members, the rate of decline for decapitated organizations is 46% less than for non-decapitated organizations.

Third, religious and separatist groups are difficult to destabilize through leadership targeting, while ideological organizations are the most susceptible to targeting efforts.[2] Religious groups that have undergone decapitation are less likely to fall apart than those that did not. The rate of decline for decapitated religious groups is 15% less than for religious groups whose leaders have not been targeted, while decapitated ideological groups fall apart about seven percent less than non-decapitated ideological groups. Overall, the data shows that decapitation is not an effective strategy, and in certain cases it actually increases organizational resilience.

First, bureaucratization is an internal mechanism that increases group stability and facilitates a clear succession process. Older or larger organizations are more likely to develop bureaucratic traits including an organized administrative staff, a hierarchy of authority, and a system of rules and regulations, making it more stable and less likely to fail. As organizations grow in size and/or age, they often require a more complex administration to function effectively. An administrative staff, hierarchy, and stable rules can allow the group to operate efficiently and, most importantly, increase its stability and capacity to withstand leadership attacks.

Second, communal support is essential in providing the resources necessary for a terrorist group to function and survive.[3] Accordingly, groups with higher levels of local support should have access to more resources, decreasing their vulnerability to destabilization. While not in all cases, religious and separatist groups often have a higher degree of support from the communities in which they operate. As religious and separatist doctrine tends to be rooted within local communities, its reproduction is not necessarily dependent upon the leader. As a result, the loss of a leader would be less disruptive to the group’s doctrinal coherence. In comparison, the doctrine upon which ideological organizations are based is usually dependent upon a particular set of beliefs that is exclusive to the group or to the leader itself. Groups with higher levels of local support should thus have access to resources necessary to survive attacks.

Past Examples
Hamas
Many of the most prominent cases of leadership decapitation fit this pattern. For example, Hamas leaders have been targeted repeatedly with unsuccessful results. Hamas has had a high amount of popular support, due in part to its ability to provide social services, education, and religious institutions to the Palestinian community.[4] Hamas’ organizational structure has made it difficult to destabilize in the face of repeated attacks on its leadership. Its bureaucratic hierarchy, combined with a largely decentralized structure of local networks, further increased its ability to withstand decapitation.[5] While the targeting of key leaders may have decreased the lethality of Hamas’ attacks, the number of operations increased over time.

Two top Hamas leaders, Shaykh Ahmad Yassin and Abdul Aziz al-Rantisi, were both targeted and killed by Israeli forces in 2004.[6] Although the organization was temporarily disrupted, these and other past cases of targeted killings incited retaliatory attacks and outrage, ultimately increasing communal support for the organization.[7] Civilian deaths, which can occur during the process of targeting leaders, have also fueled Palestinian support for Hamas.[8] Eventually, public support reached such a high level that Hamas won the Palestinian legislative elections in 2006.[9]

Al-Qa`ida
Al-Qa`ida fits this pattern as well. While Bin Ladin’s death may destabilize the group in the short-term, decapitation alone is not likely to result in its demise. First, al-Qa`ida formed in 1988, which makes it more than 20 years old—this should significantly increase its ability to withstand Bin Ladin’s death. Decapitation is almost 20% less effective than doing nothing against groups between 21-30 years of age. Second, al-Qa`ida is clearly a religious organization—its goals include the establishment of a pan-Islamic caliphate, overthrowing non-Islamic regimes, and expelling infidels from Muslim countries—which also tends to make terrorist groups more resistant to attacks on its leadership.[10] Finally, the issue of whether al-Qa`ida’s size will work in its favor is less clear-cut, since experts disagree over the group’s exact numbers.[11] Yet it is reasonable to believe that the group has more than 500 militants—which would put it over the threshold at which terrorist organizations become better able to withstand decapitation. Even if the group has less than 500 members, the rate of decapitation success for groups with between 100 and 500 members is still very small.

Religious and separatist organizations often do not depend upon the specific ideology of the leader. While Bin Ladin has provided a key inspirational role, the organization has an ideological resonance that extends beyond the spiritual leadership he provided. Rather, Bin Ladin developed and broadened the appeal of al-Qa`ida’s ideology to attract a broad base of support.[12] His anti-Western message was able to attract widespread support. Some of al-Qa`ida’s prime recruiting tools this past decade have been U.S. military actions in Iraq and Afghanistan, which may continue to draw fighters to Bin Ladin’s cause after his death. It is this broad ideological position that has made al-Qa`ida’s support and infrastructure both global and resilient.

Bin Ladin’s death may temporarily destabilize al-Qa`ida’s core in Pakistan; however, its decentralized structure should increase its resilience to long-term destabilization. The organization is highly bifurcated, with local affiliates—al-Qa`ida in the Islamic Maghreb (AQIM) and al-Qa`ida in the Arabian Peninsula (AQAP)—operating largely independently. Decentralized organizations are more difficult to destabilize through leadership attacks.[13] While these affiliates initially focused on local and regional affairs, they have increased their efforts at transnational terrorist activity. AQAP allegedly helped plan the 2009 Little Rock recruitment office shooting, the 2009 attempted Christmas Day bombing of a U.S. airliner over Detroit, and the 2010 cargo planes bomb plot. Even if Bin Ladin’s death significantly weakens al-Qa`ida’s core, which given the data seems unlikely, the local affiliates have shown that they are committed to al-Qa`ida’s larger agenda. While al-Qa`ida’s core has already been significantly weakened since fleeing Afghanistan in 2001, its quasi-bureaucratic system of administration should increase its capacity to endure this latest setback. Groups can be both hierarchical at the upper levels and decentralized at the lower and more operational levels. It is the combination of these two factors that can make groups difficult to weaken.[14]

Conclusion
Overall, the appeal of al-Qa`ida’s ideology, the growth of its decentralized networks, and the regrouping of al-Qa`ida’s leadership suggest that Bin Ladin’s death will not destroy the group. There is also a potential not only for decapitation to be counterproductive, but to result in adverse consequences. The killing of high-profile leaders such as Bin Ladin, who become symbols of martyrdom, can generate a desire for revenge and retaliation, resulting in more attacks.

This all indicates the importance of following up on this successful attack in ways that will decrease support for al-Qa`ida. Terrorist groups depend upon popular support to function, survive as covert organizations, and execute attacks. Support is necessary for a group to replenish its membership, raise money, provide resources, and ensure its ability to operate covertly. While the type of support that al-Qa`ida depends upon is very different from that of Hamas or Lebanese Hizb Allah, it is still important that groups have support in the areas where they operate. The more support, the easier it is for them to carry out activity. While its tactics are less popular, al-Qa`ida has managed to build a sizeable base of support. In fact, public opinion polls in Pakistan have found that substantial minorities feel that al-Qa`ida’s cause is legitimate and believe that it is seeking justice for Muslims.[15] It is the ideological resonance of al-Qa`ida’s doctrine that allows the group to recruit new members and can increase its ability to withstand attacks.

American leaders could help dry up this popular support for al-Qa`ida by beginning to withdraw ground forces from Afghanistan, thus neutralizing one of the causes for which Bin Ladin’s militants have been fighting. While al-Qa`ida is driven by religious doctrine, the presence of U.S. ground forces in Muslim countries has been a key tool in recruitment. Much of Bin Ladin’s support initially stemmed from opposition to U.S. forces in the Arabian Peninsula in the 1990s.[16] The wars in Iraq and Afghanistan served to further resentment toward a U.S. military presence, incite attacks, and promote recruitment. By completing the withdrawal of troops from Iraq and removing considerable troops from Afghanistan, the United States could mitigate critical sources of support for al-Qa`ida.

[6] In another prominent instance of decapitation, Yahya Ayyash’s death in 1996 directly resulted in multiple retaliatory attacks with high causalities.

[14] Hamas is a good example of a terrorist group that has a highly organized hierarchy and is also decentralized.