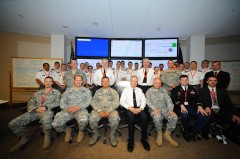 The CTC brought 24 cadets to participate in the 6th Annual FDNY-CTC Crisis Simulation Exercise at FDNY Headquarters in Brooklyn, NY. Based in the Fire Department’s state-of-the-art Operations Center, the exercise was the capstone event for cadets taking SS464 Homeland Security/Homeland Defense. The SS464 cadets worked together as an incident management team that had to respond to a major cyber attack that targeted critical infrastructure in NYC, one that required resources from the city, state, and federal entities. After a welcoming address from FDNY Commissioner Salvatore Cassano, the cadets worked with FDNY firefighters, personnel from New York City’s Office of Emergency Management, and senior leaders from NORTHCOM and the New York National Guard. The exercise included cadet briefs to Brigadier General Ray Shields from the NYNG and Chief Joe Pfeifer, one of the CTC’s Senior Fellows and the current FDNY Chief of Counterterrorism and Emergency Preparedness.