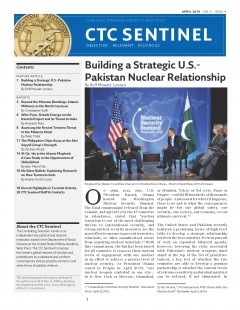 On april 12-13, 2010, U.S.  President Barack Obama hosted the Washington Nuclear Security Summit. The final communiqué released from the summit, and agreed to by the 47 countries in attendance, stated that “nuclear terrorism is one of the most challenging threats to international security, and strong nuclear security measures are the most effective means to prevent terrorists, criminals, or other unauthorized actors from acquiring nuclear materials.”[1] With this commitment, the bar has been raised for all countries to reassess their current levels of engagement with one another in an effort to achieve a greater level of nuclear security. As President Obama stated in Prague in April 2009, “one nuclear weapon exploded in one city—be it New York or Moscow, Islamabad, or Mumbai, Tokyo or Tel Aviv, Paris or Prague—could kill hundreds of thousands of people. And no matter where it happens, there is no end to what the consequences might be—for our global safety, our security, our society, our economy, to our ultimate survival.”[2]

The United States and Pakistan recently initiated a promising series of high level talks to develop a strategic relationship between the two countries. Even in pursuit of such an expanded bilateral agenda, however, lowering the risks associated with Pakistan’s nuclear weapons must stand at the top of the list of priorities. Indeed, a key test of whether the two countries are able to develop a genuine partnership is whether the current levels of extreme sensitivity and mutual mistrust can be reduced, if not eliminated. In turn, this might lead to a shared sense of purpose that the proliferation and terrorism risks associated with nuclear weapons can be mitigated in ways that are less opaque, yet fully respectful of Pakistan’s sovereignty.

In this spirit, the nuclear-related agenda for joint cooperation should concentrate on four strategic areas of engagement: understanding the risks associated with Pakistan’s nuclear weapons program; considering broader trends that could impact Pakistan’s nuclear security posture negatively; strengthening communications in case of a nuclear crisis; and increasing public outreach in Pakistan that counters the mysteries surrounding cooperation in this area of great national sensitivity.

Senior U.S. and Pakistani officials should develop a common understanding of the risks associated with Pakistan’s growing nuclear weapons program. To put this in perspective, Pakistan’s nuclear arsenal roughly doubled from 1998 to today’s estimated total of 100 weapons.[3] In the coming years, as new plutonium-production capacity at the Khushab site comes online, the total amount of plutonium that could be used in nuclear weapons could increase dramatically. Using plutonium as the nuclear-explosive material will also allow Pakistan to build smaller nuclear weapons. The expansion of the weapons program will mean more material and more construction of facilities for processing material and manufacturing weapons and delivery systems.

In light of Pakistan’s increasing emphasis on nuclear weapons to counter perceived threats to its security by rival India, Pakistan should continuously re-evaluate the challenges posed by nuclear terrorism and associated risks of proliferation. Closing gaps in U.S. and Pakistani perceptions of potential vulnerabilities requires a dialogue on possible terrorist pathways to a nuclear bomb. This entails regular exchanges on the nature of terrorist intent and efforts to acquire capability. It requires an active exploration for answers to associated questions, such as what steps must be taken for a terrorist group to carry out a nuclear plot? Where might terrorists seek assistance from insiders in Pakistan’s establishment, or from other sources of material and expertise outside the country?

Developing a common understanding that nuclear terrorism poses real challenges to broader Pakistani and U.S. interests is a prerequisite for effective nuclear-related cooperation. In and of themselves, specific technical measures to strengthen nuclear security will fall short of their desired impact unless they are guided by an appreciation that acquiring and detonating a nuclear bomb is not beyond the grasp of al-Qa`ida or its associates.

In this regard, there is a tendency in Pakistan, as in many countries, to assume that “men in caves” are incapable of acquiring a nuclear bomb and that even if terrorists were to obtain large quantities of nuclear weapons grade material, that they would be unable to construct a functioning nuclear weapon. According to this thinking, the most a terrorist group could possibly accomplish is to produce a “dirty bomb,” or radiological dispersal device. It is true that it is extremely difficult for terrorists to steal or build a nuclear weapon; however, countering nuclear terrorism effectively requires that standards for securing weapons and materials are set so high that terrorists simply cannot exploit any compromises or gaps in the defenses. Moreover, there have already been a number of Taliban attacks on Pakistani military facilities, underscoring the potential gravity of the threat.

From the perspective of ensuring that there is never a single lapse in security that compromises nuclear weapons or materials, Pakistani efforts to strengthen nuclear security should also consider the impact of broader trends affecting the country and region. In framing priorities for the appropriate forms of nuclear cooperation, the United States and Pakistan should assess ways in which local trends potentially exacerbate vulnerabilities in the nuclear establishment, now and in the future. The most important risk in this regard is that rising levels of extremism and instability in the country increase the risks that insiders in the Pakistani government, military or nuclear establishment will conspire with outsiders (extremists) to help provide access to weapons or materials to a terrorist group. Pakistan’s authorities recognize the gravity of this problem, and are coping with it by emphasizing secrecy over the more visible manifestations of nuclear security such as the redundant and highly visible layers of high walls, gates and guards at sites that are meant to deter those seeking access.

Moreover, Pakistan’s nuclear program is growing in response to perceived threats posed by India’s nuclear arsenal. Pakistan is developing an increased capacity to produce smaller and more lethal weapons. There is more nuclear-related product being produced—facilities, materials, storage, and transit. Increasing nuclear activity raises risks of a single security breakdown somewhere in the system, thereby creating more opportunities for terrorists. A candid exchange of views concerning such trends would be delicate, but it is necessary to identify blind spots and anticipate vulnerabilities before they manifest themselves.

Senior U.S. and Pakistani officials should consider innovative ways to strengthen communication mechanisms that can withstand the pressures of a prospective nuclear terrorism-related crisis. A number of possibilities must be foreseen in this regard that are ripe for joint contingency planning, such as: communications during a terrorist attack on a nuclear-related site; a potential nuclear confrontation with India; and heightened tensions subsequent to a large terrorist act occurring in either country.

Arguably, a nuclear terrorism-related incident or unfolding event would challenge the planning assumptions that rule traditional state-on-state crisis planning between India and Pakistan. It is obviously not in the interests of Pakistan, India, or the world for decision-makers to “guess” about one another’s plans and intentions in the fog of an unprecedented series of events. Yet, that is a distinct possibility given the unpredictable forms that nuclear terrorism might take, combined with the understandable reluctance of bitter rivals to discuss counterterrorist contingency planning with each other. In this spirit, some thought should also be given to initiating a trilateral dialogue between the United States, Pakistan and India aimed at reducing mutual suspicions and misplaced assumptions in assessing the actions and reactions that are likely to occur in a nuclear terrorism-related crisis. Such advance work could help reduce the possibility of being provoked into escalating a terrorist-inspired incident into a nuclear confrontation between India and Pakistan.

If actual crisis planning proves to be unfeasible due to national security sensitivities, a less sensitive form of advance preparation could be pursued through joint war gaming of notional nuclear terrorism scenarios. Conducting high level, table-top exercises in contingencies that might threaten the interests of all parties would help enhance preparedness and predictability in decision-making.

More attention should also be focused on ensuring that U.S. efforts to render assistance to Pakistan are assessed favorably not just by Pakistan’s authorities, but by the Pakistani people themselves. There should be greater effort to develop a modicum of popular support in Pakistan for nuclear-related engagement with the United States. This might entail communicating some information concerning the nature of cooperation and its value in terms of Pakistani interests. It is important for Pakistanis to see with their own eyes that such cooperation is natural, and fully consistent with Pakistan’s sovereignty interests. Unfortunately, casting a veil of secrecy over nuclear cooperation has the unintentional effect of cultivating destructive conspiracy theories that distort the nature of the shared interests of the United States and Pakistan to cooperate on nuclear-related matters. A minimalist approach to information sharing has encouraged sensationalist, unfounded allegations that the United States has a hidden agenda to control Pakistan’s nuclear arsenal. Left unaddressed, such suspicions play into the hands of extremists who seek to stoke anti-Americanism in Pakistan. Some U.S. critics—such as radical Pakistani nuclear scientist Bashiruddin Mahmood, who met with Usama bin Ladin in Afghanistan before the 9/11 attacks to discuss the al-Qa`ida leader’s interest in obtaining nuclear weapons—have made public statements suggesting that insiders in the nuclear establishment should support extremists to ensure that the United States does not one day seize Pakistan’s weapons.

The only way to counter such destabilizing powers of suggestion is to establish a greater degree of U.S. credibility with the Pakistani people. This will not happen overnight. A more transparent, open, and straightforward explanation of what the two countries are doing might help reduce the influence of those who stir the pot and incite action in the support of terrorist ambitions to acquire nuclear weapons and materials. Spreading this word in Pakistan would also reinforce a broader U.S. message that sharing nuclear security best practices between states is not unusual, but is happening everywhere.

The United States is redoubling efforts to increase nuclear security collaboration worldwide. As President Barack Obama noted during his April 2009 speech in Prague, global nuclear cooperation is not only desirable, but it is our only hope if the world is to avert nuclear catastrophe. Today’s age is one in which a single bomb detonated by a terrorist group in any country will impact us all.

Mr. Rolf Mowatt-Larssen is a Senior Fellow at the Belfer Center for Science and International Affairs at the Kennedy School of Government at Harvard. Prior to his appointment at the Belfer Center, Mr. Mowatt-Larssen served more than three years as the Director of Intelligence and Counterintelligence at the U.S. Department of Energy. Prior to this, he served for 23 years as a Central Intelligence Agency intelligence officer in various domestic and international posts, to include Chief of the Europe Division in the Directorate of Operations, Chief of the Weapons of Mass Destruction Department, Counterterrorist Center, and Deputy Associate Director of Central Intelligence for Military Support. Prior to his career in intelligence, Mr. Mowatt-Larssen served as an officer in the U.S. Army. He is a graduate of the U.S. Military Academy at West Point.