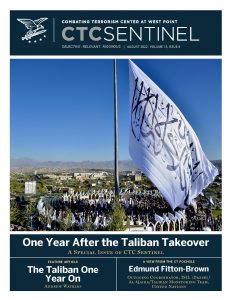 One year ago, the Taliban returned to power in Afghanistan, raising concerns that they would again provide al-Qa`ida with a safe haven. Soberingly, in the months before his death in a U.S. airstrike at the end of July, al-Qa`ida leader Ayman al-Zawahiri was releasing videos encouraging global terror, while living in a salubrious neighborhood of Kabul under the apparent protection of the Haqqani Taliban.

This special issue of CTC Sentinel focuses on evolving dynamics relevant to the terrorism threat landscape one year into Taliban rule. In the feature article, Andrew Watkins takes a deep look at the Taliban’s first year in power. He writes: “Until the subtle, almost imperceptible attempts to nudge the needle on controversial issues within the movement gain more momentum, the Taliban’s emphasis on policing public life—and most critically, keeping women out of it—is likely to continue. And given this dynamic, al-Zawahiri’s killing under sanctuary in Kabul may confront the Taliban with a greater obligation to shore up their legitimacy among jihadi circles than to fall in line with international expectations on counterterrorism.”

Our interview is with Edmund Fitton-Brown, the outgoing coordinator of the ISIL/Al-Qaida/Taliban Monitoring Team at the United Nations, who argues that a key determinant of the future international terror threat will be the degree to which the Taliban inhibit al-Qa`ida from launching attacks with fingerprints that lead directly back to Afghanistan.

Don Rassler and Muhammad al-`Ubaydi evaluate who may be next in line to lead al-Qa`ida. They write: “The decision that al-Qa`ida makes could end up strengthening the group and al-Qa`ida’s status as a global brand. It could also, like someone pulling a loose thread, facilitate a greater unraveling of al-Qa`ida and its network of formally aligned regional affiliate partners.” Tore Hamming and Abdul Sayed assess the evolving threat posed by al-Qa`ida in the Indian Subcontinent (AQIS), writing, “it appears that with Taliban-run Afghanistan offering it a platform for regional expansion, AQIS is pivoting its focus to other parts of the South Asia region. Having set its eyes particularly on India and the contested Kashmir region, AQIS is currently pushing out targeted propaganda to recruit new operatives and to instigate new insurgencies in the region.” Nishank Motwani looks at the lessons learned for countering violent extremism in Afghanistan based on a survey of how former governing elites saw the violent extremism problem set in Afghanistan before the Taliban takeover.