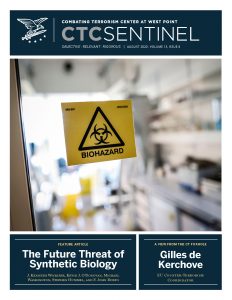 The COVID-19 pandemic has renewed concerns over bioterror threats, with Microsoft founder Bill Gates recently warning that a bioterror attack involving a pathogen with a high death rate “is kind of the nightmare scenario” facing the planet. In this month’s feature article, J. Kenneth Wickiser, Kevin J. O’Donovan, Lieutenant Colonel Michael Washington, Major Stephen Hummel, and Colonel F. John Burpo assess the potential future threat posed by the malevolent use of synthetic biology. They write that synthetic biology “is a rapidly developing and diffusing technology. The wide availability of the protocols, procedures, and techniques necessary to produce and modify living organisms combined with an exponential increase in the availability of genetic data is leading to a revolution in science affecting the threat landscape that can be rivaled only by the development of the atomic bomb.”

The authors, who all serve at, or are affiliated with, the Department of Chemistry and Life Science at the United States Military Academy, note that synthetic biology has “placed the ability to recreate some of the deadliest infectious diseases known well within the grasp of the state-sponsored terrorist and the talented non-state actor” and that “the techniques used to propagate bacteria and viruses and to cut and paste genetic sequences from one organism to another are approaching the level of skill required to use a cookbook or a home computer.” They argue that “an effective response to the threats posed by those using synthetic biology for nefarious purpose will require vigilance on the part of military planners, the development of effective medical countermeasures by the research community, and the development of diagnostic and characterization technologies capable of discriminating between natural and engineered pathogens.”

In our interview, Gilles de Kerchove, the European Union’s longtime Counter-Terrorism Coordinator, speaks to Raffaello Pantucci. Nuno Pinto presents a detailed case study of an alleged Portuguese Islamic State network with strong connections to the United Kingdom that sheds significant light on the foreign fighter recruitment pipeline between Europe and Syria in the last decade. Tomasz Rolbiecki, Pieter Van Ostaeyen, and Charlie Winter examine the threat posed by the Islamic State across Africa based on a study of its attack claims. They write: “As the second half of 2020 unfolds, it is critical that military and counterterrorism policymakers recognize what is at stake in Africa. The Islamic State is not just fighting a low-grade insurgency on the continent; in at least two countries, it has been able to seize and hold territory and subsequently engage in pseudo-state activities.”

Inside the Foreign Fighter Pipeline to Syria: A Case Study of a Portuguese Islamic State Network

The Islamic State’s Strategic Trajectory in Africa: Key Takeaways from its Attack Claims