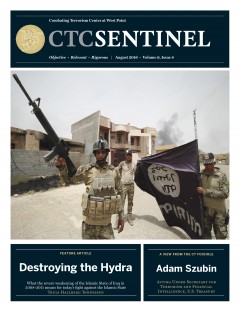 With speculation that a ground operation to try to liberate Mosul from the Islamic State could be launched before the end of the year, our August issue examines the challenges ahead in defeating and destroying the group in Iraq and Syria. In our cover story, Truls Tønnessen looks for lessons learned in the severe weakening of the Islamic State of Iraq, the group’s predecessor, in 2008-2011. The Islamic State’s brutal attempt to dominate Sunnis remains its Achilles’ heel, he argues, but it will be more difficult to shrink the Islamic State’s Sunni support base this time around because of higher sectarian tension, more entrenched jihadist control, and greater brainwashing efforts. Based on a reporting trip this month to peshmerga frontlines around Mosul, Derek Flood finds grounds for pessimism that Iraqi, Kurdish, and militia forces will be able to launch an offensive on the city this fall given the distrust and discord between the various factions and the fierce resistance put up by the Islamic State in surrounding areas. In our interview, Adam Szubin, Acting Under Secretary for Terrorism and Financial Intelligence at the U.S. Department of the Treasury, provides a detailed description of U.S. and coalition efforts to go after the Islamic State’s finances.

On other topics, Matthew Levitt documents Hezbollah’s increasingly dangerous pivot toward confrontation with Saudi Arabia and other Gulf countries, outlining how this has been driven by its involvement in the sectarian Syrian civil war and Iran’s regional agenda. And Aymenn al-Tamimi examines the impact so far of the decoupling between al-Qa`ida and its Syrian affiliate Jabhat al-Nusra, which he argues was an exercise in rebranding in order to outfox the United States and Russia and win allies on the ground in Syria—a move that appears to have paid some dividends already.

Destroying the Islamic State Hydra: Lessons Learned from the Fall of its Predecessor

A View from the CT Foxhole: Adam Szubin, Acting Under Secretary for Terrorism and Financial Intelligence, U.S. Dept. of Treasury

Hezbollah’s Pivot Toward the Gulf

The Hard March to Mosul: A Frontline Report