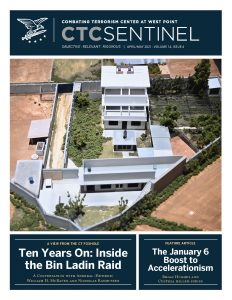 From the Editor
Ten years ago, the United States launched Operation Neptune Spear, the May 2011 raid on Usama bin Ladin’s compound in Abbottabad, Pakistan, which resulted in the death of al-Qa`ida’s founder. In this issue, CTC Sentinel speaks with Admiral (Retired) William McRaven and Nicholas Rasmussen to compare vantage points of the operation from a military and policy perspective. A decade after the raid, the operation continues to offer practitioners, policymakers, and researchers valuable lessons for the future. While some of their reflections pertain to counterterrorism policies and practices, others speak to the importance of leadership at times of uncertainty, discipline, interagency collaboration, and most of all, commitment to a shared mission. According to Rasmussen what makes it “such a compelling story at the 10-year mark is that it has such an important operational story to tell, but also … it’s a remarkable window into presidential decision-making under extraordinary conditions of uncertainty and risk.” McRaven stresses the mission was about justice for the victims of 9/11 and other al-Qa`ida attacks: “We were honored to have the opportunity to go on the mission, but make no mistake about it, this was about 500,000 plus soldiers, sailors, airmen, Marines that took this fight to al-Qa`ida.”

In this month’s feature article, Brian Hughes and Cynthia Miller-Idriss assess that the storming of the U.S. Capitol on January 6, 2021, provided a boost to far-right extremists who seek total political and social collapse, an objective sometimes referred to as “accelerationism.” They write that “although many disagreements and personality clashes continue to emerge within and among groups since the storming of the Capitol, there are increasing indications that the typically fractious world of the extreme far-right is becoming more unified toward an objective of overthrowing the country’s prevailing political and social order.”

Tim Lister examines the jihadi threat landscape in Mozambique in the wake of an attack by Islamic State-aligned militants on the town of Palma in March 2021. He writes: “for four days, they were rampant, killing at least dozens of local people and destroying much of the town’s infrastructure, including banks, a police station, and food aid warehouses. The attack reverberated around the world because Palma was home to hundreds of foreign workers, most of them contractors for the Total liquefied natural gas (LNG) project on the nearby Afungi Peninsula.” Abdul Sayed and Tore Hamming warn that “after reabsorbing a number of splinter groups, and addressing internal tensions,” the Pakistani Taliban (TTP) has “intensified its campaign of terrorism in Pakistan and is again growing in strength.” Aaron Edwards argues a new approach toward security in Northern Ireland is necessary in the wake of the April 2021 loyalist violence.

Uniting for Total Collapse: The January 6 Boost to Accelerationism

The Revival of the Pakistani Taliban

A New Approach Is Necessary: The Policy Ramifications of the April 2021 Loyalist Violence in Northern Ireland