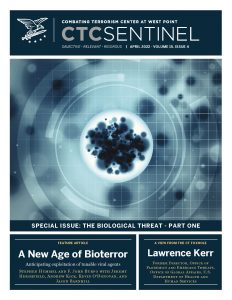 The COVID-19 pandemic has claimed nearly one million American lives. It has upended many more and produced disastrous consequences around the world. But it could have been even more catastrophic had Western nations and companies not developed highly effective vaccines. As the world hopefully begins to emerge from the pandemic, it is important to reassess the global biological threat landscape, including the possibility that bioterrorists or other bad actors might seek to exploit advances in biotechnology to engineer a future pandemic.

In a joint effort, the Combating Terrorism Center and the Department of Chemistry and Life Science at West Point have assembled some of the best and brightest thinkers in the counterterrorism, policy, and scientific communities around the world for their perspectives and analysis on the evolution of the biological threat picture. The result is a two-volume set of special issues, with the second volume being published next month.

The feature article of this volume anticipates how bioterrorists may exploit tunable viral agents in a new age of bioterrorism. The article is authored by Major Stephen Hummel and Colonel F. John Burpo with Lieutenant Colonel Jeremy Hershfield, Lieutenant Colonel Andrew Kick, Kevin O’Donovan, and Colonel Jason Barnhill. They write: “Components of a disease such as transmissibility, lethality, and the infectious window can potentially be modified for desired tactical, operational, or strategic effects. While this capability is currently beyond the skills and knowledge of the biology enthusiast, a trained individual would possess such skills and knowledge, though they may lack the necessary material and infrastructure support. Hence, it is necessary to develop and maintain capabilities that can respond to a variety of pathogens and possible effects.”

This issue features an interview with Lawrence Kerr, who until his retirement from government service earlier this year was the Director of the Office of Pandemics and Emerging Threats in the Office of Global Affairs at the U.S. Department of Health and Human Services. We also interview Brad Ringeisen, the Executive Director of the Innovative Genomics Institute. Before his retirement from government service in July 2020, Dr. Ringeisen served as the Director of the Biological Technologies Office at the Defense Advanced Research Projects Agency (DARPA).

Filippa Lentzos, Gregory Koblentz, and Joseph Rodgers argue “the biological risk landscape is rapidly evolving and presents significant new challenges to preventing the accidental, reckless, or malicious misuse of biology. At the same time, oversight systems to ensure that life sciences research is conducted safely, securely, and responsibly are falling behind. An urgent overhaul to realign biorisk management with contemporary risks is needed.”