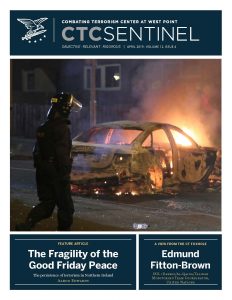 The murder earlier this month of journalist Lyra McKee in Northern Ireland on the night before Good Friday illustrates the fragility of peace in a region in which terrorist violence has persisted. In our cover article, Aaron Edwards writes that this was “the latest in a series of incidents that have raised the specter of a surge in terrorist violence in Northern Ireland.” In examining the evolution of the threat from militant groupings on both sides of the sectarian divide, he notes there has been a “blurring of the concepts of terrorism and criminality that challenges orthodox perspectives on the security landscape in Northern Ireland.”

Our interview is with Edmund Fitton-Brown, the Coordinator of the ISIL (Daesh)/Al-Qaida/Taliban Monitoring Team at the United Nations.

This issue features the concluding article of a two-article series focused on IED and WMD network convergence. The first article, published in our February 2019 issue, warned there was a high risk that profit-minded suppliers within vast, transnational IED networks may expand in the future into WMD proliferation. In the second article, Major Stephen Hummel, Lieutenant Colonel Douglas McNair, Colonel F. John Burpo, and Brigadier General James Bonner examine in greater detail the ways this could happen.

Audrey Alexander and Bennett Clifford examine the threat posed by Islamic State-affiliated hackers and hacking groups. Through “analysis of several U.S. prosecutions of Islamic State-affiliated hackers and their networks, proficiencies, and activities,” they argue that “very few of these actors demonstrate advanced hacking or cyberterrorism capabilities.”

Caleb Weiss examines the evolution of the threat posed by the Islamic State in Somalia, noting the group, “which is believed to only number in the low hundreds of fighters, appears to have significantly expanded its operations across Somalia, albeit from a relatively low base.” He argues the resulting reignition of tensions with the much larger al-Qa`ida affiliate al-Shabaab means “it is far from clear whether the Islamic State in Somalia will be able to sustain its operational expansion.”

The Fragility of the Good Friday Peace: The Persistence of Terrorism in Northern Ireland

Reigniting the Rivalry: The Islamic State in Somalia vs. al-Shabaab