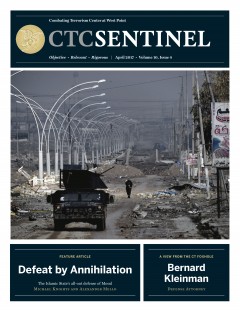 In our April cover article, Michael Knights and Alexander Mello examine the Islamic State’s ongoing defense of Mosul. Despite the group’s use of innovative and lethal tactics such as pairing car bombs and drones, it has been outfought by coalition-backed Iraqi forces, which liberated eastern Mosul in January. With Islamic State fighters now engaged in a final fight on the western side of the Tigris, the authors describe how the group continues to prioritize mobile defensive tactics to seize the initiative and mount counterattacks.

Our interview is with Bernard Kleinman, an American defense attorney who has been on the defense teams of several high-profile individuals in terrorism cases, including Ramzi Yousef, Khalid Sheikh Mohammed, Abu Anas al-Libi, and alleged USS Cole mastermind Abd al-Rahim al-Nashiri. Mirroring the global rift between al-Qa`ida and the Islamic State, Kleinman reveals that almost all the prominent alleged al-Qa`ida figures in U.S. custody he has had conversations with since 2014 are disturbed by the actions of the Islamic State, which they view as corrupting Islam and illegitimately targeting Shi`a for death. Kleinman reveals his client Ramzi Yousef, who is being held in the “Supermax” facility in Florence, Colorado, recently finished writing a 250-page treatise theologically repudiating the Islamic State. Kleinman also weighs in on the Guantanamo Bay military tribunal process and the relationship between Iran and al-Qa`ida, which his clients have described as being driven by a “my enemy’s enemy is my ally” logic.

That is also the conclusion of Assaf Moghadam who draws on recently declassified Abbottabad letters and court documents to argue the relationship between Iran and al-Qa`ida, while historically not without tensions, is best understood as a tactical cooperation that is based on cost-benefit calculations. He argues that despite the intervention of Iran and its proxies in the Syrian civil war, these calculations are unlikely to change anytime soon. Fifteen years ago this month, al-Qa`ida detonated a truck bomb outside the el-Ghriba synagogue in Djerba, Tunisia, killing 19, including 16 German and French tourists. Aaron Zelin sheds new light on al-Qa`ida’s first successful international attack after 9/11, drawing on court documents and detention files. Finally, with concern growing over the Islamic State threat to Jordan, Sean Yom and Katrina Sammour assess the social and political dimensions behind youth radicalization in the kingdom.

Counterterrorism and Youth Radicalization in Jordan: Social and Political Dimensions

Defeat by Annihilation: Mobility and Attrition in the Islamic State’s Defense of Mosul

A View from the CT Foxhole: Bernard Kleinman, Defense Attorney

Marriage of Convenience: The Evolution of Iran and al-Qa`ida’s Tactical Cooperation