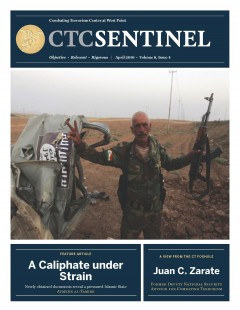 From the Editor
A batch of apparent Islamic State administrative documents obtained by Aymenn al-Tamimi and published for the first time in the cover story of our April issue sheds new light on how the Islamic State has come under strain militarily, financially, and administratively as it loses territory and is degraded by coalition airstrikes in Syria and Iraq. Although it is not feasible to verify their authenticity with Islamic State operatives, al-Tamimi argues their format and appearance do not raise any red flags. In our interview, Juan Zarate, who from 2005 to 2009 served as Deputy National Security Advisor for Combating Terrorism, weighs in on the evolution of the terrorist threat and explains how the United States can stem the flow of terrorist financing and help win the battle for hearts and minds.

Christopher Anzalone finds the Somali jihadi group al-Shabaab has proven “remarkably resilient” in the wake of territorial losses thanks to a pragmatic strategy that blends guerilla warfare with terrorist attacks on soft targets and an internal security network that has so far helped ward off a strong challenge from Islamic State sympathizers. With President Obama visiting Saudi Arabia this week, Chris Zambelis examines what he calls “The Kingdom’s Perfect Storm,” warning that elevated sectarian tension in the Eastern Province following the execution of Shi`a cleric Sheikh Nimr Baqir al-Nimr in January has been aggravated by the Islamic State’s targeting of Shi`a in the region in a bid to provoke and take advantage of Sunni-Shi`a strife. Scotland appears not to face as severe a challenge from violent Islamist extremism as some other Western countries. Stefano Bonino examines the reasons for Scottish exceptionalism, including an ‘inclusive’ Canada-like body politic, but also draws attention to its limits. Finally, Mokhtar Awad follows up on an article he co-authored in the August 2015 issue of CTC Sentinel to examine how the Islamic State threat to Cairo and mainland Egypt has evolved. He argues that despite a sometimes faltering and amateurish campaign and hostility from pro-al-Qa`ida factions, there is a real possibility the Islamic State could consolidate its position in the Nile Valley.

A Caliphate under Strain: The Documentary Evidence

The Resilience of al-Shabaab

The Jihadi Threat to Scotland: Caledonian Exceptionalism and its Limits